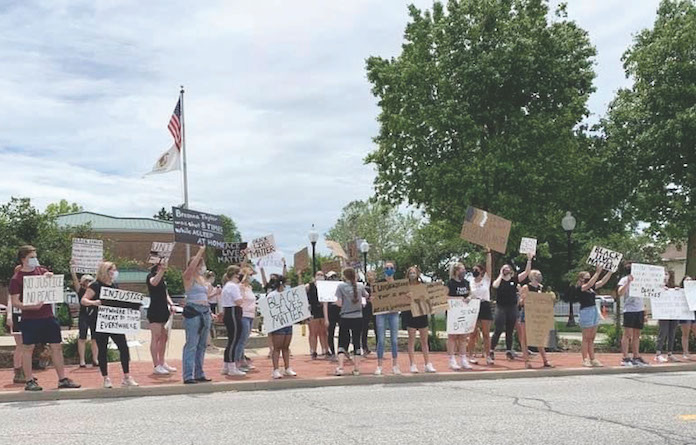 This event, which involved predominately younger people carrying signs and marching from Bolm-Schuhkraft City Park down Main Street to City Hall, was one of hundreds across the country and world in recent weeks sparked by the death of George Floyd.

“We wanted to do this because racism isn’t just in large cities; it’s in small towns as well,” Mia Boyer-Edwards and B. Phillips, two of the protest’s organizers, told the Republic-Times. “We need the citizens of our small towns to realize this so that we can help our neighbors with their issues with racism. The people of Monroe County need to understand that racially motivated violence, threats and murders can happen anywhere. Even if racial violence doesn’t reach the point of death, it’s still important to protest it and help others realize that it happens.”

Floyd, a black man, died after now-former Minneapolis, Minn. police officer Derek Chauvin, a white man, placed his knee on Floyd’s neck for almost nine minutes while he was handcuffed and lying face down.

Chauvin has been charged with second-degree murder and second-degree manslaughter, while three other officers who were with Chauvin were fired and face charges of aiding and abetting in connection with Floyd’s death.

The protests, which have become increasingly peaceful, have been marked and marred by violence and looting in several larger cities.

The protest on Thursday was in “solidarity with protestors and civilians across the country who are currently being brutalized by the police,” according to Columbia High School graduates Boyer-Edwards and Phillips.

The City of Columbia released a statement thanking the protesters, with Mayor Kevin Hutchinson praising their nonviolent actions after attending the gathering.

“The peaceful demonstration we saw here should serve as a model for others wishing to enact change,” Hutchinson said. “At all times, the group was very polite and respectful and followed all applicable laws and rules. I was quite impressed with the well-organized message they conveyed.”

“These kids are incredible,” Donjon said. “I taught most of them in Safety Town and fifth grade DARE. The CPD is proud to stand/kneel with them for unity.”

At the event, Phillips spoke about experiences as one of the few black people in Columbia.

“One point that I really wanted to make clear is that racism isn’t just in large cities, and we have to be aware of the racism that occurs here in our small community in order to help our neighbors in larger communities,” Phillips said. “Just because you don’t see it doesn’t mean that it doesn’t happen.”

Phillips asked people to ask themselves questions like have they ever been scared for their life while getting pulled over, has anyone ever clutched their purse when walking past them or have they been bullied because of their skin color.

“These are things that have happened to me as a person of color, and I understand that some people may never understand what that feels like,” Phillips said. “By asking yourself these questions, it really puts everything into perspective.”

Columbia’s press release also said protesters called on the CPD to implement policies like requiring officers to de-escalate situations, if possible, before using force, restricting chokeholds and strangleholds unless deadly force is authorized or prohibiting them altogether, requiring a verbal warning, if possible, before using deadly force and requiring other officers to stop another officer from using excessive force.

The city said all eight measures the demonstrators called for are already in place in compliance with the Illinois Law Enforcement Training and Standards Board.

It also said officers get “regular training” on topics including arrest and use of force and constitutional search and seizure, with a focus on “human rights, cultural competency, implicit biases, racial and ethnic sensitivity, constitutional law/enforcement authority and recognition of mental illness.”

“Our policies and practices are fundamentally opposed to the actions that resulted in George Floyd losing his life,” Hutchinson said. “Our officers are among the best trained in the nation and are held to the highest standard.”

Boyer-Edwards and Phillips thanked the city for its positive response, but took issue with a couple facets of it.

Boyer-Edwards said she disliked the statement’s passive voice in regards to Floyd’s death.

“George Floyd didn’t ‘lose his life.’ Officers of the police force who had sworn to protect and serve him took his life from him,” she said. “He was murdered. I would like the community to remember that.”

Boyer-Edwards also stressed she appreciates that the CPD has implemented the policies mentioned, but the protest was also in solidarity with those demonstrating against the “national issue(s)” of “police brutality and a lack of police accountability.”

For their part, Phillips said the city did not address one of the main messages of the protest.

Prior to Thursday’s demonstration, signs of the events in larger cities were minimal in Monroe County.

Rumors that proved to be unfounded spread on social media last Tuesday night that rioters were moving from South County to here and that the Walmart  off Telegraph Road could serve as a meeting spot.

As a precaution, the CPD conducted extra patrols through its city and the Monroe County Sheriff’s Department was also prepared to assist. The Waterloo Police Department stationed officers and vehicles at Waterloo’s Walmart after the store closed.

“We’re certainly aware of what’s going on around us and taking the appropriate measures,” Columbia Police Chief Jerry Paul said.

The county’s law enforcement agencies and Monroe County Emergency Management Agency later released a joint statement reassuring residents that they are monitoring the situation and preparing for if violence occurred here.

The agencies also reminded individuals to not trust everything they see online.

“During these times, some stories that arise are not true and can cause fear as well as confusion,” the statement said. “Posts you see on unofficial pages or website might be false or misleading.”

Instead, the statement encouraged individuals to watch for official information from police departments or government agencies or sign up for the Code Red Emergency notification system by calling the Monroe County EMA at 939-8681, ext. 534.

While there was no violence last Tuesday, there were some signs of protest.

A few people could be seen holding signs supporting the Black Lives Matter movement outside CHS and some downtown Waterloo business owners reported last Wednesday morning that words and symbols in support of that movement had been written in both paint and chalk overnight.

Waterloo residents have planned an event similar to the one in Columbia.

This Saturday from 1-4 p.m., residents are organizing a “stationary and peaceful protest against white silence, improper police conduct and to spread awareness for the racial injustice black Americans face,” according to the Facebook event’s description.

The protest will be next to the Monroe County Courthouse on Mill Street.

Masks are mandatory and social distancing is strongly encouraged.

People should bring signs, water and protection against the heat.

Donations to organizations fighting for related causes will also be accepted at the event, but “inciting/causing violence or destruction will not be tolerated or condoned.”