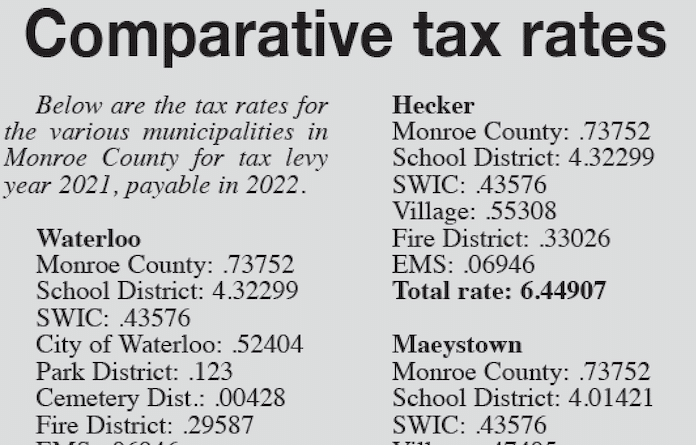 Koenigstein noted overall taxes collected for Monroe County are lower this year by just over $300,000.

The lower amount of collectable tax coupled with overall 2021 property assessments being up about 5 percent on average has resulted in lower total tax rates throughout the county.

The number of taxable parcels increased by 184, also contributing to lower rates.

Koenigstein pointed to the expiration of the Admiral Parkway Tax Increment Financing District in Columbia as one reason for the lower tax bills in the city.

“All the tax amounts for that TIF district get reallocated to the total of the Columbia (tax) base, creating a lower rate for Columbia residents,” Koenigstein said.

He added the influx of funds which had previously been used to be reinvested in the TIF district have resulted in a 10 percent reduction in Columbia property tax bills on average.

The infusion of funds plus the district requesting over $1 million less than last year and a school tax decrease of over .5 percent has resulted in a significant drop in the dollar amount of property taxes paid by Columbia residents to the district.

Even with lower rates overall, not every taxpayer in Monroe County will see a lower tax bill compared to last year, including homeowners of parcels which experienced an increase in value during the most recent assessment.

Taxpayers in Waterloo can also expect a slight increase in taxes payable.

Koenigstein pointed out the Waterloo School District and other taxing bodies have requested more money, resulting in more taxes payable despite similar or lower tax rates.

Residents owning farmland in Monroe County can also expect to pay more, a trend which began in 2013. Koenigstein noted farmland assessed values increased between 10 and 15 percent again this year, which will be reflected in taxes payable.

The increases are due to gradual equalization under the 2013 Farmland Assessment Law, which changed the way farming properties are assessed.

Monroe County’s share of property tax money for 2021 is $7.6 million, up slightly from the $7.3 requested the prior year.

The City of Columbia will get about the same amount as last year, which is just over $2.8 million.

Koenigstein estimated county residents should expect the first tax bills to arrive in the mail in mid-September.

Residents may pay their entire tax bill in their first installment.

As usual, the bills will be printed at MAR in Valmeyer. Koenigstein said the “proofing”  process is still ongoing, but he expects bills to be mailed within two weeks.

He pointed out taxpayers should soon be able to pay tax bills online at monroecountyil.gov.

Koenigstein recommended using an “e-check” payment, which carries a $1 charge, rather than credit card payments which carry a fee of 2.35 percent of the total bill.