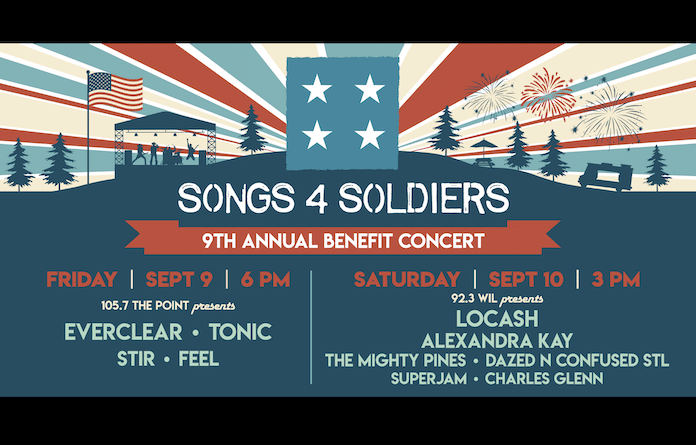 Songs4Soldiers began in 2013 as a concert meant to raise funds for combat veterans in need of assistance.

So far, the organization has managed to place over $900,000 into the hands of more than 650 combat veterans and their families, and Songs4Soldiers founder Dustin Row hopes to break the million dollar mark with this year’s concert.

With the organization’s ninth annual event this Friday and Saturday, Row reflected on the concert’s growth and the positive effect it’s had on hundreds of veterans.

Row specifically remarked on how the concert has grown beyond himself and the handful of individuals who manage the organization throughout the year to become a staple event in Monroe County thanks to those who come out to support it.

“If no one came to it, we really wouldn’t have anything, right?” Row said. “At this point, what’s so cool about ‘Songs’ is that I know I personally don’t really feel like it’s mine anymore. It never was, really. It just feels like it’s really turned into a proud Monroe County thing and, y’know, we just kinda steer the ship a bit.”

Row added that, along with support from attendance, the concert couldn’t come together without the many volunteers who help put it together and the businesses and organizations that sponsor it, from local restaurants to companies like Budweiser.

“It’s 100 percent credited to everyone that supports it,” Row said. “From sponsors that help pay for the show out here to nearly 300 volunteers that volunteer and sign up to sell tickets, sell T-shirts, and work the show, and the community of Columbia and Monroe County.”

Row also credits the event’s radio sponsors – 105.7 FM The Point and 92.3 FM WIL – for the reach it provides as well as the role it has played in helping secure artists for the annual concert.

Given the long list of business sponsors for the event, it’s clear Songs4Soldiers has struck a chord with a variety of businesses. Row suggests that this is largely due to the positive goal of the organization.

He said that they are a transparent and “very genuine charity.”

Assisting combat veterans that are struggling, he added, is “one of the very few things left that I think the general population sees eye-to-eye on.”

“I think by just sticking to our guns and by being a great charity and doing what we say we do with the money, it’s attractive,” Row said.

Featured bands at this year’s concert include Feel, Stir, Tonic and Everclear on Friday with Charles Glenn, Superjam, The Mighty Pines, Dazed n Confused STL, Alexandra Kay and LOCASH on Saturday along with Andrew Dahle and Clusterpluck performing on the event’s second stage.

The lineup marks a notable change in the event’s traditionally classic rock performances. Row said the lineup is still “classic rock” in a sense – given the emphasis on 1990s rock that those in their 30s and 50s are likely to feel some nostalgia for.

Row explained the shift is just meant to change things up a little bit.

“I’m a firm believer that, no matter how cool or great something is, if you keep doing the same thing over and over and over again it can get stale,” Row said. “And so I thought and my team thought, you know, this is our ninth year, let’s try something else.”

Despite the slight change in artists, Row said the concert will still be the family-friendly event people have come to know.

Refreshments and food from a number of local vendors will be available, and veterans and kids under 12 will still be able to get in free – though the inflatable bounce houses and entertainment from past years will not be present.

Most importantly for Row, the concert will be in the same spot it has been for several years: Columbia’s Bolm-Schuhkraft Park.

Row said many people have approached him commenting on how the event will undoubtedly have to move given how big it’s become, but Row said he has no intention to tear the concert away from its local roots.

“Why mess up the formula?” Row said. “Columbia is its home, Monroe County is its home, and this field is one of my favorite places in the world. I don’t wanna move it, and I never will.”

Row added that, should the event sell out both nights, then he’ll simply enjoy its success. At this size, the event is plenty successful while still being small enough to be managed by volunteers.