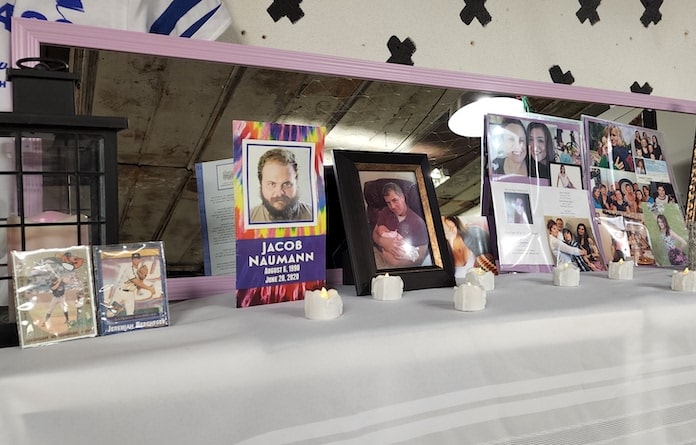 Members of the community gathered to honor loved ones lost due to drug abuse and recognize International Overdose Awareness Day last Wednesday in downtown Waterloo.

The event was organized by Waterloo Listens and held inside Philomena + Ruth at 118 W. Mill Street. Several attendees brought pictures of their loved ones to place at a small vigil set up in the store.

Amanda Chase and Amanda Schweigert of Waterloo Listens organized and led much of the event, which largely consisted of open discussion.

Attendees first went around the room to share their personal connection with drug addiction and overdose. Some lost family members, others had suffered from addiction previously and others like Waterloo Mayor Tom Smith and Waterloo Alderman Stan Darter came to learn about the issue in the community.

The gathering then turned to address certain issues pertaining to drug addiction and overdose, including social stigma and access to care.

Dr. Kevin Xu, who had been contacted by Schweigert to serve as a physician perspective for the event, spoke about the role of doctors in addressing drug addiction, how often too much emphasis is placed simply on the medicine and science and how the opioid crisis was exacerbated by doctors’ prescriptions in the 2000s.

Philomena + Ruth owner Elizabeth Hahn, who hosted the event, explained that she wanted to do so to help shed light on the issues in the community.

“This isn’t something that only happens in the cities or only happens anywhere but Waterloo,” Hahn said. “People think that we’re kind of in a bubble here, and we’re not.”

Chase also offered her voice on why she wanted to help organize the event.

The local issue was brought to her attention after speaking with Schweigert – a drug awareness counselor – and hearing about the clients she has in recovery.

“I thought we have a huge need in the community and if we can provide some support and also some resource to help our community go forward during this crisis, that this event could be a step in that direction,” Chase said.

Schweigert discussed some of her thoughts on the stigma and other issues surrounding drug addiction. In her eyes, language and how society approaches and discusses those experiencing addiction can have a major impact.

“Just like the disability advocacy movement is concerned about what language people use to describe disabilities, when it comes to mental health and substance abuse, the language that we use matters because we can easily use language that completely dehumanizes people,” Schweigert said.

She also mentioned the Cornerstone Laine recovery residence, a proposed drug rehabilitation center that failed to move forward after much debate and discussion last year.

Schweigert noted the affect that statements from those in opposition to Cornerstone Laine might have had to those trying to recover from drug abuse.

“The fear of having a treatment center in your community and the things that people said based on that fear, that sends a message to people that are struggling with addiction,” Schweigert said. “It sends a message that we don’t trust you.”

Madelyn Michael also spoke at the event. Michael and her husband both have a history of drug abuse and recovery.

One of the points she emphasized was the importance of Naloxone, commonly known as Narcan, which can be used as an emergency treatment for narcotic overdose. A consensus at the event is that more businesses, first aid kits and citizens should carry it just in case.

She also discussed her advocacy for Cornerstone Laine and the good that such a place would have done in the community. She spoke frankly about the talking points against the center.

“There’s this whole stigma, and it’s like, these people are already in the community,” Michael said. “And if we give them a place to heal, they won’t be in your backyard stealing your stuff or goodness knows what their concerns are.”

Michael further discussed the need to have an accessible, quality recovery center in the community, citing prohibitive travel and wait times as reasons why individuals are often unable to get help to recover and often die as a result.

“I always compare it to a food desert,” Michael said. “I feel like Monroe County and some of the Midwest and the surrounding area is like a food desert. There’s no options for recovery.”

Leisa Martinez, one of the organizers for Cornerstone Laine, was also present. She spoke about the impact of losing a loved one to an overdose and how those around them are often far too unprepared to help them through the experience.

“I think that, especially for families who have lost a child or a sibling or whatever it may be in this way due to overdose, it can be a very lonely loss and sort of a lonely period because no one knows how to talk about it. No one wants to bring it up,” Martinez said.

She also touched on her experience trying to convince the community to allow for Cornerstone Laine. She noted there was a tremendous amount of support from the community – even among those who were against the proposed location.

A general consensus among attendants who were reached was that last week’s event was positive in regard to helping deal with trauma and emotion while also being informative.

Most expressed interest in similar events in the future, either as a sort of support group or as a space to help educate the community, with Michael specifically indicating an interest in meetings to help people learn how to use Narcan and perform CPR.

Chase expressed the possibility of this event leading to additional meetings, as is the case with other events organized by Waterloo Listens.

“Some of our Waterloo Listens stuff kind of evolves organically with what’s happening in town or regionally and so we would really like to be responsive,” Chase said.