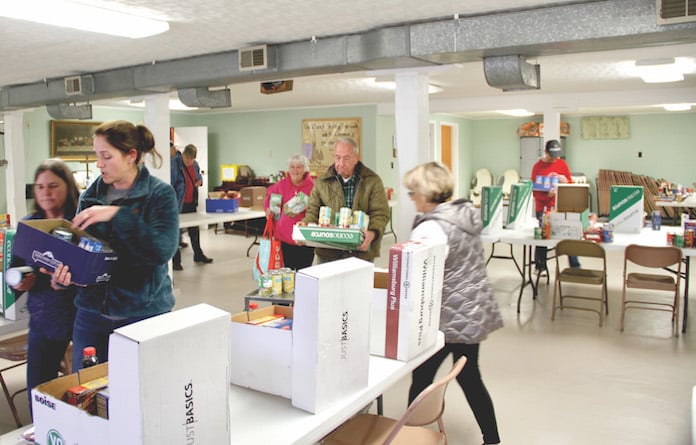 As area school districts are working to ensure children are fed during the week while schools are closed, a program based in Maeystown is doing the same for students on the weekends.

That is the Bi-County Backpack Program, which has operated out of St. John United Church of Christ in Maeystown since January 2012.

“No kid should ever feel that they don’t have food in their bellies,” said Laurie Knoll, the church’s mission team leader.

Rev. Patrick Poole brought the idea for the program to Knoll after Kelly Lerch, who worked for the Waterloo School District at the time, told a gathering of local religious leaders about some children in area school districts not having food to eat on the weekends.

If those children did not get assistance, they might not eat or only eat very little until school on Monday.

Knoll said that moved her, as her children were ages 4 and 2 at the time.

“I thought about my own cupboard and how I’d buy a snack I’d think my kids would want and they ended up hating it or they wouldn’t eat it,” she recalled. “And I’d end up throwing it away because I didn’t use it. I think that’s what tugged on a lot of the heartstrings to get this started was our own personal waste of food and how you didn’t even think about that there was somebody out there who could be your neighbor or somebody you knew who had a need at home.”

Knoll began by sending out emails to the congregation of her church. Over the years, the program has grown.

It has received donations or volunteers from most UCC churches, all Catholic churches and all Lutheran churches in Monroe and Randolph counties over the years.

“It has grown to where it is extremely ecumenical, which is really exciting,” Knoll said.

The surge in volunteers and donations has been needed, as the program has also expanded.

In 2012, it served 23 families. That number has fluctuated over the years, as volunteers contact the appropriate person in the Waterloo, Valmeyer, Red Bud and Prairie du Rocher school districts at the start of each school year to determine how many children are in need of meals on the weekends.

This year, the program is helping 52 families and 131 children.

“We couldn’t do this without every person who comes and helps,” Knoll said.

At first, the volunteers would put the food in backpacks, but now it goes in boxes.

The focus is on feeding the children, but Knoll said the parents do eat some of the food.

The volunteers do not know the names of those people because the initiative is anonymous. In some school districts, Knoll said volunteers deliver food to the students’ home, while in others the district distributes the food.

In recent years, the program has also expanded to stock a food pantry a social worker in the Waterloo School District runs and some freezers in the Red Bud School District that students can take from if they need food for the weekend.

This work continues throughout the summer, when the program prepares an entire month’s worth of food instead of a weekend’s worth, and Knoll said it will go on during the coronavirus pandemic with a skeleton crew.

“We will continue to provide for our families on a weekend basis because that’s what we do,” she said.

While the need for volunteers is currently lessened by the need for social distancing, Knoll said the program has been having some problems with getting the food it normally does.

Typically, it purchases items from Schnucks in Waterloo, IGA in Millstadt, and Sam’s Club and Aldi in South County.

But there is some concern those grocery orders might not be filled because of panic buying.

“Because of people hoarding and buying too much that they don’t really need, we are struggling to get a food order,” Knoll summarized.

So, the best way people can help right now is to donate food items.