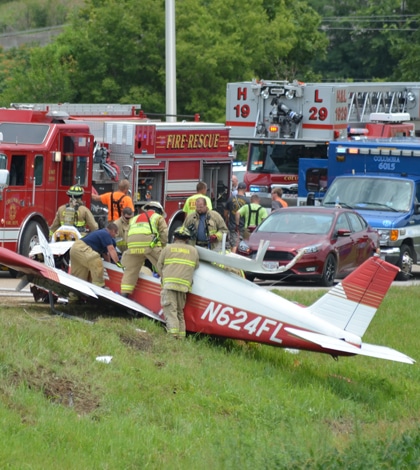 A picture perfect Saturday afternoon took a terrifying turn when a small aircraft crash landed about 12:30 p.m. off Palmer Road near Southport Drive in Columbia.

“There were a bunch of people who saw the plane go down and pulled over on Route 3 and came running to help,” said a grateful Kelly Schweitzer, wife of pilot Scott Schweitzer of Fults.

Her husband is the owner of the single-engine 1971 Piper Cherokee and was piloting it at the time of the crash. The 36-year-old is a U.S. Army veteran. Also inside were Scott’s good friend and U.S. Marine Corps veteran Vic Brewer and Vic’s wife, Diana Brewer, along with one of Scott’s 7-year-old twins, Logan.

“We had taken off from Sackman (Field, located off Bluff Road in rural Columbia) and were headed to Alton to have lunch at High Flyers Grill,” Scott said.

Instead, within a mile of takeoff, Scott was suddenly looking for a place he could set down the plane.

Bystander Lynne Mitchell saw the entire situation unfold and extended kudos to Scott for his grace under pressure.

“Max, Sophia, and I just saw a plane crash on Bluff Road,” she wrote Saturday on social media. “(The pilot) was too low, engine sputtering and he took out the power lines. He managed to get it down in the tiny field on the side, missing cars, and kept it upright.”

The plane clipped an Ameren line, and power was out to about 1,300 customers for almost two hours.

“The first responders, fire department, EMS, police department — we just can’t thank everyone enough,” said Kelly, who was not onboard the plane..

All four occupants were transported by ambulance to different St. Louis area hospitals.

Scott has facial lacerations and stitches, along with a sprained ankle. His front seat passenger, Vic Brewer, lost a few teeth, sprained an ankle and has a back fracture.

In the back seat, Logan is by all accounts no worse for the wear.

“He’s milking this for all it’s worth,” Scott laughed, noting Logan received a free dessert at Applebees the other night for his troubles.

But the real hero of the hour just might be Diana Brewer, who was sitting in the back seat with Logan. When impact was imminent, Diana wrapped her body around Logan, taking the brunt of the impact and providing a soft surface to protect Logan.

Diana is currently the only passenger still in the hospital and had surgery Tuesday to correct a pelvis broken in three places. She also has a broken tailbone.

But all four passengers survived and will — eventually — walk, and Kelly can’t help but think that’s a miracle.

The Federal Aviation Administration and National Transportation Safety Board are still investigating a cause of the crash. The investigation could take weeks to conclude.