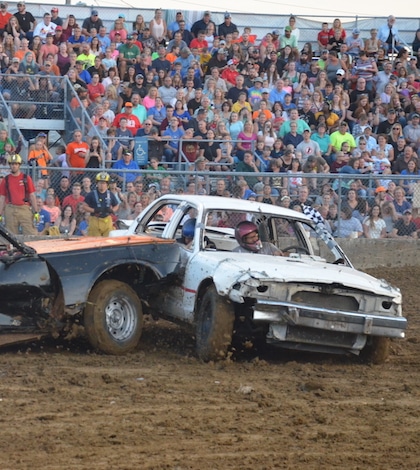 The Monroe County Fair Auto Demolition Derby did not disappoint the thousands of spectators who gathered at the fairgrounds in Waterloo on Friday night, offering plenty of car-crushing action.

In the compact second heat, checks went to Jeremy Robert of Modoc for first, Jarrett Huebner for second and Jeremy Mickles for third.

In an 11-car semi-stock class that featured several past derby winners, Tony Ahrens of Waterloo took the top trophy ahead of Alex Voelker of Waterloo and Jason Goeddel of Waterloo, who won the Mad Dog trophy.

In the heavy-hitting modified class, Tom Larimore of Marissa placed first and took the Mad Dog trophy, with Scotty Blavesciunas of Belleville and Brady Robert of Waterloo placing second and third, respectively.

For a collection of photos from the derby, click here.