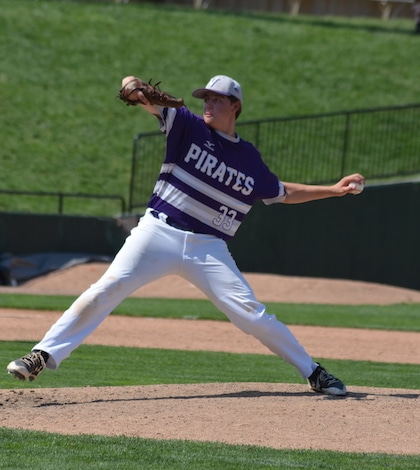 Redemption. Valmeyer is one win away from achieving just that at the Class 1A state baseball tournament in Peoria.

The Pirates lost in the championship game a year ago at Dozer Park and vowed to get back there again in 2018. With Friday’s 7-3 win over Goreville, the team got its wish.

Valmeyer (31-9) will take on Aurora Christian at 9 a.m. Saturday for the state title.

“It’s a dream to have the chance again,” Valmeyer head coach Greg Reinhardt said after Friday’s win. “Just so much confidence these guys have.”

It should come as no surprise that a few seniors who were stung by last year’s championship game defeat came up big in Friday’s semifinal.

Goreville’s leadoff hitter singled to start the game, but was promptly picked off by Chism. The next hitter walked, but he was also picked off. A one-out single by Goreville in the second inning also ended in a Chism pickoff.

“It’s because of my leg kick, it’s the same from when I’m pitching to like when I’m actually delivering to home to when I’m throwing to first,” Chism told reporters after the game. “The biggest trick is when I look at them and I’ll look like I’m going to home and they think I’m going home, so they take a lead and I pick ’em off.”

Following a single by Cole Juelfs, Krekel smacked an RBI double to right-center in the bottom of the third to put the Pirates on the board. Kempfer added an RBI single to put Valmeyer up 2-0.

In the bottom of the fourth, Andrew Whipple reached on an error, Chism doubled to left and Juelfs walked, leading to another Krekel double and a 4-0 lead. Kempfer followed with a bloop RBI double to right to make it 6-0 Valmeyer.

Whipple and Juelfs came in to relieve Chism and secure the semifinal victory.

Krekel has upped his season average to .403 with his postseason success, and hopes to continue the hot swinging on Saturday.

“I just hit what they give me,” he said. “We were a little sore from last year, coming in second. We’re going for it this year.”

Asked what he’ll tell his team before taking the field for Saturday’s title game, Reinhardt responded: “They don’t need much pep talk. They know how to win.”