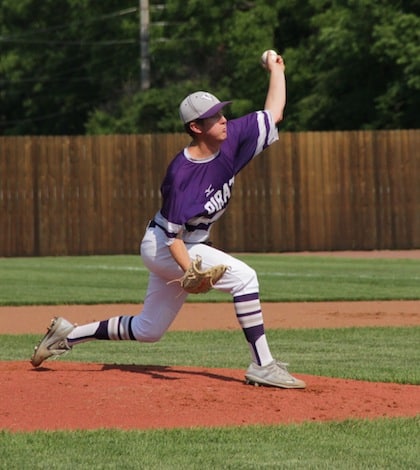 The Pirate ship will make a return voyage to Peoria this weekend in search of the ultimate treasure.

The Valmeyer High School baseball team downed Illini Bluffs, 6-1, Monday afternoon to win the Class 1A Springfield Super-Sectional at Lincoln Land Community College and advance to the state tournament for the second year in a row.

Jake Krekel swung a sizzling bat on a sweltering hot Memorial Day afternoon, going 4-for-4 with two doubles and two triples with three RBIs for the Pirates (30-9), who will face Goreville at noon Friday at Dozer Park in Peoria.

The winner of Friday’s contest will battle the winner of Ottawa (Marquette) vs. Aurora Christian for the state title on Saturday.

Krekel’s two-RBI triple gave the Pirates an early lead in the top of the first inning Monday.

Sophomore southpaw Philip Reinhardt was in complete command of his pitch arsenal, striking out eight over six solid innings for the mound victory.

He helped himself at the plate with two hits and an RBI.

Cole Juelfs pitched the seventh inning to close out the win.

Valmeyer placed second at Dozer Park last season, and set a goal of returning to the promised land as soon as that final out was made.

“Very special times to make it back to Peoria,” Coach Reinhardt said. “What a great group of confident men.”

On Saturday, the Pirates defeated Nokomis to win a second straight sectional title. For more on that game, click here. For photos from both games, click here.