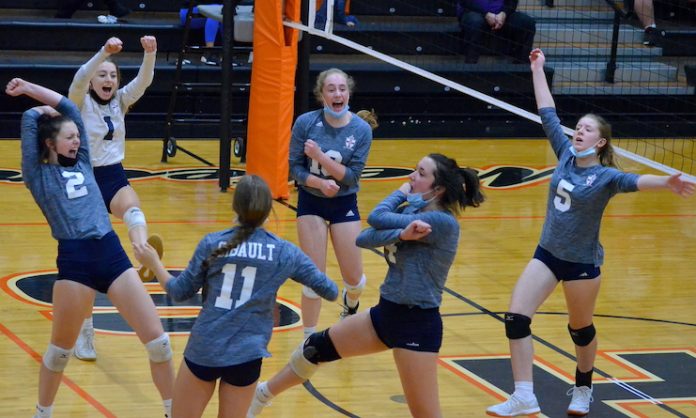 It will be a battle of Monroe County rivals for the Class 1A Marissa Sectional title on Wednesday night.

The Pirates appeared to be well in control of the first game until Trico cut Valmeyer’s lead to 22-17. A huge kill by Brooke Miller stopped the rally and gave her team the momentum it needed to close out the set.

The second game was back and forth most of the way, with Trico taking a 13-12 lead before Valmeyer head coach Karla Bivins called a timeout.

The game went to 15-15 before the Pirates created a little breathing room at 19-15, forcing a Trico timeout.

Trico got to within 20-19, but a big kill by Kierstin Miller swung the momentum back Valmeyer’s way.

Valmeyer advanced to the sectional by virtue of winning the Metro East Lutheran Regional championship.

The Pirates opened the regional last Wednesday with a win over Father McGivney, 25-10, 25-19. Brooke Miller had 11 kills and Markee Voelker had 14 points to lead Valmeyer.

The Hawks came out strong in the first set, but Steeleville rallied to cut Gibault’s lead to 15-14, forcing a Hawks timeout.

Gibault came out of the stoppage on fire to take the first set. Strong serving from Ella Range, hard hits from Lucy Range and solid all-around play from Abby Grohmann and Emma Schmidt led to the rally.

The second set was tied at 9-9 before Gibault went on a four-point rally, forcing a Steeleville timeout.

The Hawks went up 22-13 before a Steeleville rally cut it to 23-17. Gibault closed it out from there.

Gibault advanced to the sectional by winning the New Athens Regional title.

The winner of Wednesday’s sectional title game advances to the Class 1A Raymond Supersectional on Friday night.