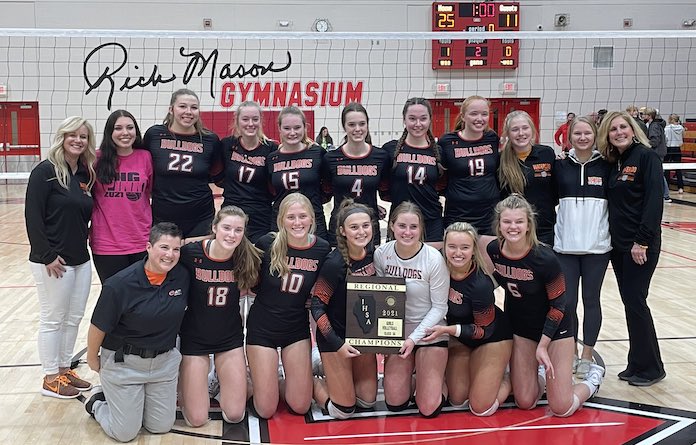 The magical season for Waterloo High School volleyball has taken them to the brink of a sectional title.

With a 25-14, 25-17 victory over Mattoon on Monday in the Class 3A Civic Memorial Sectional semifinal, the Bulldogs (28-5) set a date for Wednesday’s title clash with a tough Taylorville team.

Taylorville, which topped Centralia in two sets Monday, has 33 wins this season.

One common opponent between Wednesday’s sectional final competitors is Mascoutah, which Taylorville downed in two sets on Oct. 28. Waterloo took down Mascoutah three times this season, all in two sets.

A win Wednesday night would send the Bulldogs to Friday’s Taylorville Supersectional against the winner of the Rochester Sectional.

In Monday’s win, Waterloo got out to an 8-1 lead in the first set and never looked back.

On the night, senior Ella Bockhorn recorded nine kills and senior Ellie Schwehr had 20 assists. Josie Briggs, a junior, battled through an injury to contribute in the victory.

Waterloo advanced to the sectional by virtue of a Triad Regional championship last week.

Last Tuesday, the Bulldogs took down Mississippi Valley Conference foe Triad by the count of 25-8, 25-15. Paige Montgomery, a senior, recorded 10 kills and Schwehr again set the table with 19 assists.

Waterloo lost in the sectional title game at home in 2019, the last time there was a postseason in high school volleyball.

The Bulldogs are coached by Angie Crawford, who is in her 11th year at the helm.

Crawford has previously said that her team’s success this fall is an “absolute team effort,” with everyone playing vital roles on and off the court.

WHS has never won a sectional title in its 49 years of playing volleyball, according to IHSA records.

The season came to an end for the Columbia High School volleyball squad last week.

Columbia advanced to the title game by virtue of a 25-23, 25-22 win over rival Freeburg last Tuesday. Gill-Kemper had nine kills to lead the Eagles.