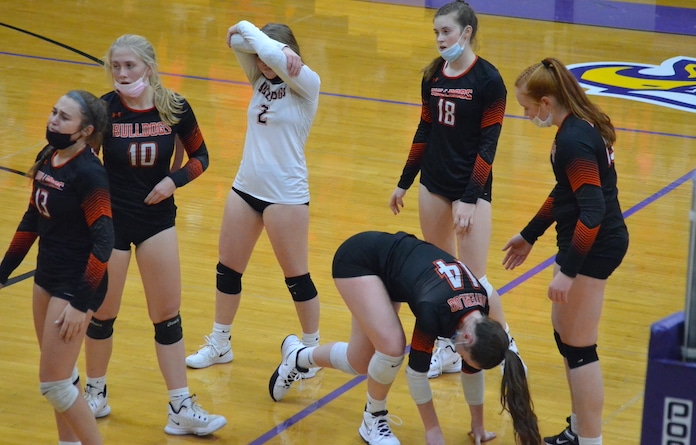 It wasn’t the way Waterloo had envisioned its season to end, but fans can take pride in the fact their Bulldogs went down fighting.

Down one starter due to a practice injury the day prior, the Waterloo High School volleyball squad dropped a 25-20, 25-22 heartbreaker to Taylorville in the Class 3A Civic Memorial Sectional championship game Wednesday night.

Hailey Montgomery, a senior middle blocker who is the twin sister of standout outside hitter Paige Montgomery, was injured in practice Tuesday and unable to suit up for the match.

“Unfortunately, we were thrown off due to Hailey’s injury,” Waterloo head coach Angie Crawford said. “We had to move Ella Bockhorn back as a middle hitter. She hasn’t trained there in over a year. She put up a super effort. We had to pull from our subs Caroline Arnold and Emily Biffar to cover Ella’s right side position. Both girls put in a super effort!”

Waterloo shot out to a 7-2 lead in the opening set, with Emma Day providing a strong presence at the net.

Taylorville, which has won 34 matches this season, shook off its slow start and got into rhythm. Suddenly the first set was tied at 13-13. Waterloo built an 18-14 lead, but Taylorville battled back to tie it again at 18-18 before eventually emerging victorious.

“We came out super strong, but fell with our inconsistency to find a way to get through Taylorville’s defense,” Crawford said.

Taylorville whipped up a 10-2 start to the second set, throwing Waterloo off its game and forcing the Bulldogs to use both of their timeouts early.

Paige Montgomery, the team leader in kills all season and a Southern Illinois University Edwardsville commit, led the charge with seven kills during the last-ditch surge. One long rally between the two teams ended with a dramatic return by Maddie Davis from the back center boundary to keep the ‘Dogs in the fight.

Unfortunately, it was too little too late for Waterloo as Taylorville put the finishing touches on the sectional title win.

“I was very proud of the energy and fight from all the girls,” Crawford said. “The second set was simply awesome to see our courage and grit, not to just give up.”

In addition to Paige Montgomery’s seven kills, Waterloo was led by Arnold with six kills and Ellie Schwehr with 19 assists.

Waterloo ends its season with a school record 28 wins in addition to an undefeated record in the Mississippi Valley Conference and another regional crown.

“These girls played a legendary season for WHS, one that will hold dear with me,” Crawford said.