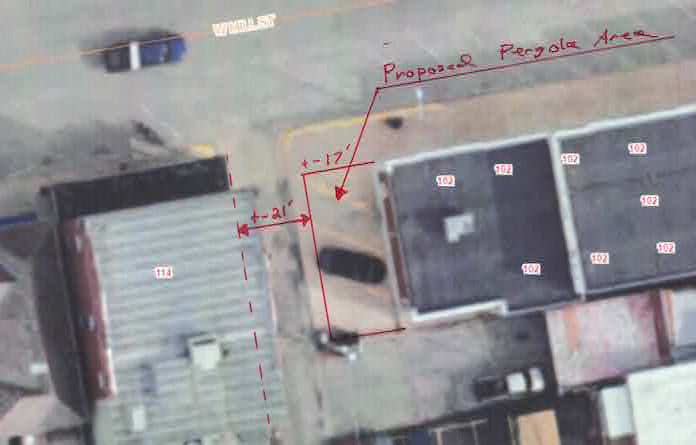 A downtown Waterloo restaurant’s request earlier this month to build a detached pergola as part of renovation efforts failed to advance past the committee stage.

James and Jared Gallagher petitioned the Waterloo Planning Committee on May 2 for a permit to construct a pergola across the alley from Gallagher’s Restaurant at 114 W. Mill Street, which is slated to open later this year following extensive renovations.

“The idea is to have outdoor dining/waiting area for patrons of Gallagher’s Restaurant,” Waterloo Zoning Administrator Nathan Krebel stated in a memo summarizing the meeting. “After the meeting, the zoning administrator looked into building and zoning codes to get a clear understanding of what is allowed in this special request.”

“This being said, the definition of an accessory use does not allow such proposal to be on someone else’s property,” Krebel said. “Permitted accessory uses only allows ‘the retail service or commercial use when located on a parcel of five acres or more.’ Furthermore, zoned setbacks cannot be achieved because of size limitations of the proposed location.”

Krebel added there’s “no question” this proposed pergola would beautify Waterloo, but zoning code does not allow an accessory use off premises.

“Another option is to eliminate the pergola and have a fenced-in patio,” Krebel explained. “Such use would not require a permit and would not be considered an accessory use.”

The Gallagher brothers also asked if the city would help pay for some of the cost to improve the right-of-way areas including curbing, sidewalks, and alley areas abutting Gallagher’s Restaurant.

“The committee asked the Gallaghers to come back with more information – including which areas they are requesting the upgrades – and a cost breakdown of each area,” Krebel said.