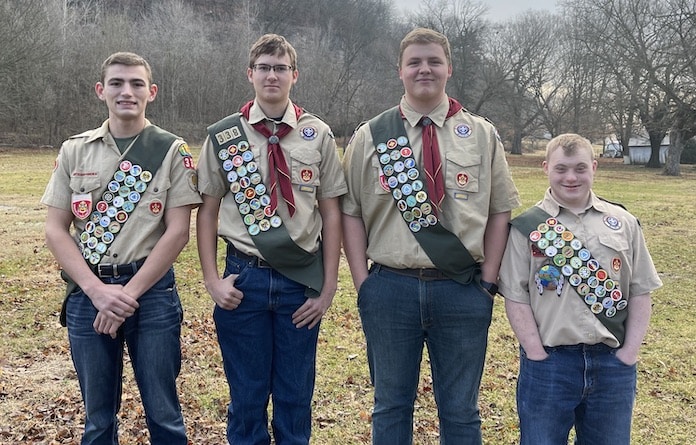 Troop 338 has been going strong for over 60 years. Including the four newest Eagle Scouts, the troop has a total of 43 Eagle Scouts.

As Cub Scouts, the group was led by Bill Myers, and as Boy Scouts they were led by Michael Glenn. Glenn also serves as Troop 338 Scout Master, and his wife Laura Glenn is assistant Scout Master, Cub Master and Unit Commissioner.

The troop is chartered by St. Joseph’s Catholic Church.

Hooten, Koch, Smith and Walker have been together for the scouting journey since Smith joined the other three as a scout in 2014. The boys have learned so many life skills throughout the years and are great friends.

Tristin is the son of Robert and Heather Hooten of Prairie du Rocher.

Tristin’s Eagle Scout project was to paint the girls’ dugouts at Prairie du Rocher School. He chose the school colors blue and gold. He completed his project Oct. 1 and on Nov. 3, he was awarded his Eagle Scout rank.

Tristin started Cub Scouts as soon as he finished kindergarten. He completed Tiger, Wolf, Bear and both years of Webelos. Then it was off to Boy Scouts. He has enjoyed being in Boy Scouts and would recommend joining. Tristin, 17, joined the Army National Guard and became an Army soldier on Aug. 11.

Being an Eagle Scout has awarded him three ranks in the military and will reward him further in his life.

He expressed gratitude to Ace Hardware for donating paint and supplies; Christian Mitchell for helping paint the dugouts; his parents and brothers for all their help, Mike and Laura Glenn for all their years of dedication in assisting him acquire his goal of becoming an Eagle Scout and to everyone else who helped along the way.

Levi is the son of Sean Koch and Jamie Koch of Red Bud. He achieved the rank of Eagle Scout on Dec. 1.

Levi started his scouting journey by joining Cub Scouts in 2012. In April 2016, he crossed over from Cub Scouts to Boy Scouts. In 2019, Levi was chosen to be in the Order of the Arrow. He earned a total of 26 merit badges – his favorite being for chess.

For his Eagle Scout project, Levi completed a flag retirement box for the Prairie du Rocher American Legion, presenting it on Sept. 25.

Levi is a senior at Red Bud High School and works part-time at Elite Ag in Ruma. He enjoys helping his dad farm, working on and riding his ATV and welding.

Levi would like to express gratitude to John Watts, Laurie Umbdenstock, Total Eclipse, Zach Walker, Brant Washington and his mom for all of their help with his project.

Chase is the son of Matthew and Sarah Smith of Ruma. He achieved the rank of Eagle Scout on Dec. 31 at his Court of Honor ceremony held at Chester Scout House.

His brother Riley is also an Eagle Scout.

Chase joined Cub Scouts in first grade the fall of 2011 as part of Pack 342. In his third year of scouting, he placed at the local pinewood derby and was able to represent Pack 342 at the Kaskaskia District Pinewood Derby.

In 2014, he crossed over to Webelos and transferred to Cub Scout Pack 338 in Prairie du Rocher. In 2016, Chase was awarded the Arrow of Light. He was inducted into the Order of the Arrow in August 2019.

Chase earned a total of 26 merit badges – his favorite being the required cooking merit badge.

For his project, Chase completed a sign for the Prairie du Rocher Community Fire Department’s future firehouse site. He completed his project on Dec. 10.

Chase is a senior at Red Bud High School, where he is a member of FFA, in Best Buddies and the manager of the Musketeer football and basketball teams. He is also a member of the Ruma Roadrunners 4-H Club and the Randolph County 4-H Federation.

Zachary is the son of Ryan and Dawn Walker of Prairie du Rocher.

He achieved the rank of Eagle Scout on Dec. 1 during his board of review.

Zachary has been a member of the Prairie du Rocher scouting program since 2011 when he joined as a Tiger Cub.

During his scouting career, Zachary has earned a total of 27 merit badges, along with completing all the Cub Scout and Boy Scout ranks. He was also inducted into the Order of the Arrow, attended National Youth Leadership Training, and has served as assistant and senior patrol leader.

For his Eagle Scout project, Zachary chose to create a Prairie du Rocher Historic Walking Trail. This trail starts at the Prairie du Rocher Village Park and has eight stops at historic buildings around town. There are signs at each location giving a little bit of history of that building.

History has always been of interest to Zachary, especially local history, so it was important to include that in his project. There are brochures available at the start of the trail to guide visitors along the way. There is also a link provided in the brochure to make donations for future upkeep of the trail signs as well as brochure printing.

Zachary expressed gratitude to the businesses and private residences that agreed to be on the tour, as well as to Roeslein Modular Fabrication, Ultra Play and Total Eclipse for donations of materials towards his project and all of the individuals that helped complete his project.

Zachary is currently a senior at Red Bud High School. He is a member of the National Honor Society and Math Team. He is currently in the enrolling process to the aerospace engineering program at Missouri S&T and plans to start there in the fall.

He recently joined the Prairie du Rocher Fire Department as a probationary member and will become an official member once he graduates from high school.