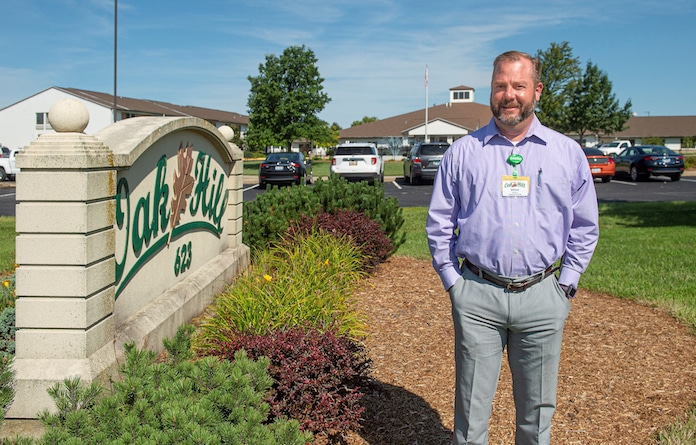 The path a self-described military brat followed to his role as administrator of Oak Hill Senior Living & Rehabilitation in Waterloo has varied directions over time and miles.

But it has always turned back to caring for people.

As a junior at Belleville East High School in 1992, Brian Koontz began a three-year stint as bat boy for the St. Louis Cardinals.

After games, he was part of a team that ensured equipment was ready for the next game.

The military brat self-classification came from his family life, moving around the world with his dad – an Air Force pilot and colonel – which brought him through Belleville and Scott Air Force Base twice, first during grade school and later for high school.

In the strike-shortened 1994 season, Cardinals player representative Todd Ziele took him aside and advised, “This season is over.  You’d better make plans to go to college.”

He gathered up credits from Southwestern Illinois College (then Belleville Area College), headed off to Eastern Kentucky University and then Eastern Illinois University, where he graduated with a bachelor’s degree in psychology.

He continued at EIU, entering a new program in which he earned a master’s degree in gerontology – a program teaching the physical, social and psychological impacts of and best care for the aging.

He stayed in southwestern Illinois, and in subsequent years worked for an organization managing living facilities for the developmentally disabled – including a job where he was able to design an Alzheimer’s unit.

From there, he assumed a position as social services director for a nursing and rehabilitation center before moving on to other jobs in senior care facilities over the next dozen years.

The path turned away from caring for people to providing medical equipment when he went to work for Custom Medical Solutions in St. Louis for three years, where he was hired as corporate operations officer.

“But I missed long-term care for people,” Koontz said. “I heard about the position opening at Oak Hill and after considerable discussion with my wife – long-term care isn’t an office job, nor is it limited to regular hours – I applied for the job.”

There were several interviews, Koontz said.

“I asked them at least as many questions as they asked me,” he said. “I wanted to be sure it was the right thing for me and my family.”

He was chosen by the selection committee and his first day at Oak Hill was June 10.

He said a critical element of that is the competency and longevity of the staff, from administrators to nursing personnel.

“The relation between the staff and residents is truly unique,” he said.  “It’s a homelike, positive culture. Staff members know the residents as people and not just room numbers.  For example, they know who does not want their curtains opened early in the morning because the light hurts their eyes as they awaken.  Each resident is unique, and staff knows what each needs and wants.”

Moving to the COVID-19 pandemic that has changed procedures for long-term care, Koontz said that even in this high-pressure environment, the facility has maintained an extraordinary 94 percent occupancy rate.

Oak Hill has not had a single resident test positive for the coronavirus. Multiple positive tests among staff have resulted in those persons being sent home to quarantine until they can return.

Koontz attributed both the facility’s atmosphere and culture as well as its excellent performance to date in protecting residents from COVID pandemic to former administrator Kim Keckritz, who recently moved to a part-time role.

“She built the staff and kept them together as a team,” he said.  “And when the pandemic first emerged, she led implementation of strict measures to best ensure the health of all concerned – residents and staff.  Wearing masks, proper personal protective equipment, rigid access control prohibiting entry by non-staff or residents and daily reviews of procedures have all been part of the health record performance to date,” Koontz said.

He noted that beyond restricting visitors, limited access has caused delays in all but the most critical contractor repair service.

Koontz said the atmosphere and expert management created an environment he found much easier and comfortable to enter when he arrived than one might expect during an  ongoing crisis.

“Things were under control when I arrived, and all hands were onboard totally,” he said.

Asked where he hopes his career that has taken him from Busch Stadium to Monroe County will lead him next, Koontz said he and his family are exploring moving from the Granite City area to Waterloo.

“My wife Katie and I are impressed with the area and the schools,” he said. “Our youngest son Evan will enter eighth grade this fall. Our daughters Paige and Emma will be away at college.”

Asking Koontz for his personal goal at Oak Hill brought a smile to his face.

Pausing, he said he wants to be part of the longevity that has been so important to the facility’s performance.

“I want this to be my last job,” he said. “I want to retire from here someday and pass on the culture and positivity that is so important to this place and its people – residents and staff.”