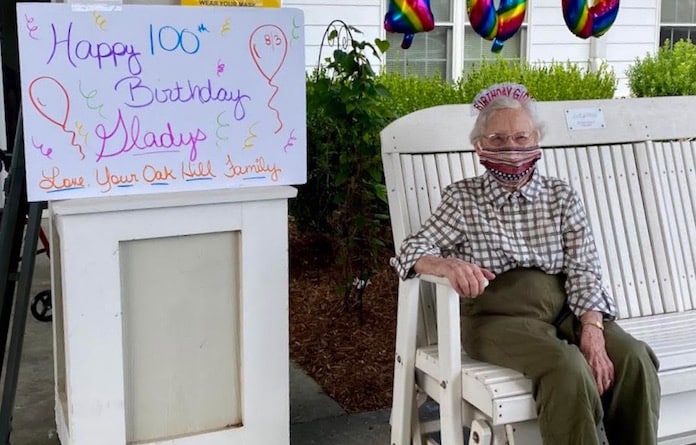 ebrated her 100th birthday in the same manner she has spent most of her life, surrounded by family and friends.

A socially distant drive-by birthday parade was held Aug. 2 in the circle drive near the main entrance to Oak Hill Senior Living & Rehabilitation in Waterloo to celebrate the centenarian.

Gladys was born Aug. 3, 1920 in Valmeyer to Fred and Emma (Luhr) Pieper. She graduated from Waterloo High School and later married Clifford Ludwig in 1942. Clifford built a house in Columbia in 1948 and Gladys lived there until she moved into Magnolia Terrace in Waterloo in 1996.

Due to COVID-19 visitation restrictions, Lonny spoke with the Republic-Times about his mother’s long life.

One thing Lonny said he remembered about his mother while he was growing up is that he “never felt like an only child.”

“Her house was always open and people were welcome,” he said.

The tradition of having people around is still intact for Gladys. Lonny said there is a standing weekly appointment to attend the “Brew Crew” meeting consisting of Gladys and whoever else is available.

Lonny said these visits were named as such because most of the visitors “sip beer” while Gladys would enjoy a glass of wine.

A modified version of the Brew Crew still happens, although visitors talk with Gladys through a window at Magnolia Terrace during the coronavirus pandemic.

Lonny said his mother is an avid fisherwoman.

“She’s been fishing forever,” he said, adding that “she fished until she was almost 97.”

He also recalled fishing with her at a young age in New Hanover at the ponds on his grandmother’s property.

In addition to fishing, she had a large garden and loved to work in her yard. She still enjoys spending time with her grandchildren and great-grandchildren and watching St. Louis Cardinals baseball games.

“It’s nice. We’ve been really lucky to have (all the grandchildren) within 45 minutes of here,” Lonny pointed out.

In her younger days, Gladys raised turkeys and would sell them at a farmer’s market in St. Louis.

After she married Clifford, she was a Sunday School and Bible School teacher at St. Paul United Church of Christ in Columbia.

When her husband died in 1974, she worked at the Columbia senior nutrition site and at Hardee’s in Columbia, mostly “just for something to do,” Lonny said.

He also said Gladys was very close to her sister, Norma Park, whose husband died in 1973.

“Neither of them re-married,” Lonny said, adding that his mother said “she’d never find another man like that,” referring to her late husband.

Lonny also commented that he believed his mother has lived so long because she is “a hard worker and has great genes,” adding that “she doesn’t look 100” and noting she didn’t move into a skilled nursing unit until she was 99.

When Lonny asked her what she would tell the Republic-Times as the secret to long life, she replied “good living.”

When he pressed his mother for elaboration, she said “they don’t need to know any more than that.”