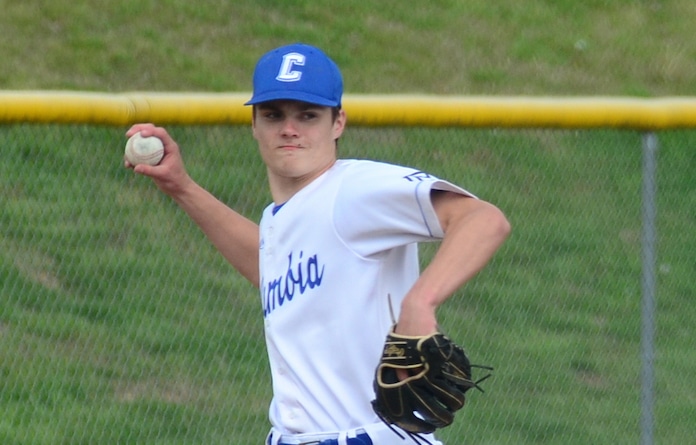 Columbia (19-6-1) won 3-2 at Belleville West on Monday. Dom Voegele pitched a complete game two-hitter with nine strikeouts for the Eagles, with Aidan Gaither and Lucas Riebeling each driving in a run.

On Tuesday, the Eagles scored four runs in the top of the seventh inning to best Gibault, 10-6.

OnWednesday, Columbia kept the good times rolling with a 9-6 victory at home over Piasa Southwestern.

Last Wednesday, Columbia blasted Roxana, 10-0. Voegele again pitched a gem, striking out 10 in five innings of one-hit ball. He was also 2-for-2 with an RBI at the plate.

Alex Schreckenberg went 2-for-3 with three RBIs for the Eagles, who host Piasa Southwestern on Wednesday and Mascoutah on Friday.

Columbia will compete in the Class 2A Marquette Regional starting May 18 against the winner of Staunton vs. Roxana. With a win, the Eagles would play May 21 for the regional title.

Waterloo (13-13) lost 12-0 to Mascoutah on Monday, as the Bulldogs were held to just four hits. Bryce Reese doubled for the ‘Dogs.

On Tuesday, the ‘Dogs lost 5-3 to Nashville despite a 3-for-3 showing from Nate Phillips.

On Wednesday, Waterloo lost 4-3 to Mascoutah. Evan Davis went 2-for-4 with an RBI.

Last Wednesday, Waterloo won 10-4 and 6-2 over Civic Memorial. Reese and Davis each went 4-for-7 on the day. Nolan Veto pitched six and two-thirds solid innings with 10 strikeouts and Phillips followed with a complete game two-hitter.

The Class 3A regional pairings have not yet been announced.

Prior to Tuesday’s loss to Columbia, Gibault (13-16) won 20-5 over Metro East Lutheran on Monday, which was senior night. Jude Green, a senior, went 4-for-4 with a home run and four RBIs. Tyler Frierdich and Kameron Hanvey each added four hits and five RBIs in the victory.

On Saturday, Gibault lost 11-8 to Belleville West and 16-7 to Althoff. Daniel Darin had a home run and three RBIs against Belleville West. Frierdich, Green and Hanvey collected two hits each against Althoff.

Valmeyer (5-18) is also in the Gibault Regional and will open at home Monday against Metro-East Lutheran. With a win, the Pirates would face Marissa on May 18.

Valmeyer lost 5-4 at Lebanon on Monday and lost 10-2 to New Athens on Wednesday. Elijah Miller went 3-for-3 on Wednesday.

On Thursday, Valmeyer won 5-2 over Marissa. Miller went 3-for-4 with two RBIs.

Last Tuesday, Valmeyer lost 5-1 to Dupo. Evan Rowe-Brown doubled for the Pirates, who play Wednesday at New Athens and Thursday at Marissa.

Dupo (2-12) got a star showing from Chance Hunter in last week’s win over Valmeyer. Hunter went 2-for-4 with a homer and three RBIs and threw a complete game three-hitter.

On Wednesday, the Tigers lost 6-1 to Steeleville. Nate Ticer went 2-for-3.

Last Wednesday, Dupo dropped a 12-2 contest to Gillespie at GCS Ballpark in Sauget. Conner Smitt went 2-for-2 with two RBIs.