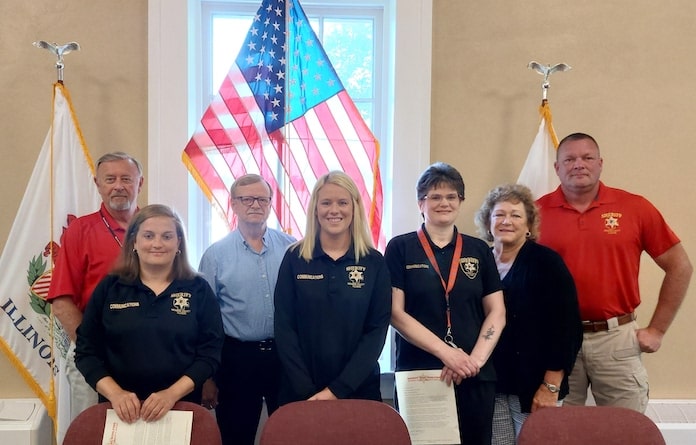 During Monday’s meeting of the Monroe County Board, three members of the Monroe County Sheriff’s Department dispatching team were recognized for outstanding performance and professionalism in handling two separate calls in May which required expertise and a level head.

“The role of dispatcher is one of the most challenging and taxing positions we have,” Monroe County Sheriff Neal Rohlfing began. “They coordinate all emergency services for the county besides Columbia,” which has its own dispatching team.

First to be recognized was Dawn Kreher, who was the dispatcher responsible for arranging emergency services during a May 14 incident involving a fatality and several serious injuries sustained in a two-vehicle crash on Route 3 just north of Red Bud.

Rohlfing said calls that involve multiple serious injuries and possible death are “some of the hardest to deal with,” as they are “extremely chaotic scenes that are highly emotional.”

Also recognized were Jennifer Kujawksi and Tiffany Brewer for their performance during a May 29 call involving the near drowning of a child.

Rohlfing thanked the dispatch team for its calm and professional actions that resulted in saving the life of the child.

Calls involving children are “always the most difficult situations,” Rohlfing said, adding that other departments noted the expert handling of that particular incident by the dispatch team.

The recognitions Monday underscored the overall quality of county dispatch personnel, who handled over 29,000 calls for service last year.

Monroe County Commissioner Vicki Koerber, who had been a member of Monroe County EMS for more than 18 years, said the county dispatchers are “professional at the utmost level.”

She added that dispatchers are the “nuts and bolts” of emergency services and it takes special individuals “to do the job effectively.”

MCSD deputy and dispatch supervisor Chad Mueller said the recent performance of the team “speaks volumes about the experience they have and the training they’ve been through.”

Mueller said the average tenure of the eight full-time county dispatchers is in the 10-12 year range, which is “unheard of” and much higher than average.

Kreher, who has been with the department nearly 25 years, 22 as a full-time employee, noted the longevity of Monroe County personnel is double the average for most people in the profession.

She said the typical stay for a full-time dispatcher in other departments is 5-7 years.

“It takes a lot of family time,” Kreher said of the position, which does not take off for holidays or weekends.

She added it can be an especially stressful job at times and there are some calls dispatchers “will carry with us the rest of our lives.”

“My husband told me that he could tell by my footsteps when I got home whether it was a good day or a bad day,” Kreher said.

When asked what has changed in her more than two decades with the MCSD, Kreher answered, “everything that possibly could.”

The biggest change Kreher described was the availability of computer-aided dispatching technology.

Mueller said the new dispatch center being located in the lower level of the Monroe County Courthouse has been a boost to the department.

“It is state-of-the-art. It’s the best there is,” Mueller said, noting the dispatch team does more than speak to callers and emergency personnel.

“Our ladies and guys do it all,” including warrant and order of protection entries, which are handled separately by departments in other counties, Mueller said.

He added the eight full-time 911 dispatchers   are “rock solid” and his time as dispatch supervisor for the past 2.5 years “has been a pleasure.”

Also at the meeting, Monroe County Engineer Aaron Metzger sought board approval to begin the preliminary processes for a project that would raise Bluff Road between HH and Hanover Road to avoid recurring flooding issues in the area.

Metzger pointed out the road in 2019 was underwater for over 30 days, with parts being restricted even longer for large truck traffic due to ground saturation concerns.

Metzger said the county has some funds already earmarked for the project.

A total of $750,000 was set aside in the state’s capital bill while Paul Schimpf was still in office as state senator. Metzger said the Illinois Department of Commerce and Economic Opportunity had recently released an additional $500,000 toward this project.

Metzger told commissioners the money could be used to fund needed engineering, right-of-way and environmental studies.

Having the prerequisite work completed would make the project “more appealing” when submitting proposals for upcoming grants, Metzger said.

The board gave consent for Metzger to draft a resolution to begin the work. The resolution is expected to be passed at the Aug. 15 meeting.