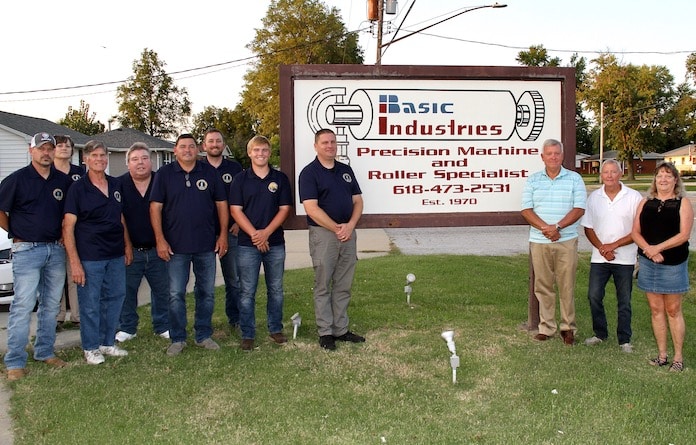 Siblings Roger, Rick and Diane Hottenrott were recently honored at a Hecker Village Board meeting for their time with the business.

Basic Industries was started by the siblings’ father, John Hottenrott, in 1970. According to Roger, John had plenty of experience with machining before starting the business.

Prior to Basic Industries, John worked at Chelar Tool & Die in Belleville. Roger said his father and a number of other workers left the business to set out on their own.

“They had a machinists strike there, and a lot of former employees that were machinists, they went out and started their own businesses and machine shops, and he was one of them,” Roger said. “Find a building in Hecker, and that’s where he started.”

Roger recalled his and his siblings’ own start with the business – largely sweeping floors and doing other odd jobs while getting a feel for what John did.

She discussed starting out cutting grass and cleaning, later doing deliveries and coming to learn more about the business side of things from their mother.

“As I grew older I learned the office work with my mom,” Diane said. “I used to do the billing and the payroll. My brothers all worked out in the shop.”

Diane eventually came to take care of the books. Rick – who learned welding and primarily worked with John – worked the machines and was eventually joined by Roger, who went to work elsewhere after earning an accounting degree.

Roger and Diane both spoke fondly of Basic Industries.

Diane spoke about the time it allowed her to spend with her brothers, and Roger described the success of the business and the quality of their work.

“It provided a good living for me and my brother,” Roger said. “We feel like we had a good reputation among our clients that we were able to get stuff out on time, sometimes before they needed it. And if they needed it sooner, we tried to do our best and produce quality work.”

After an eight-month shutdown for organizing, the business is being sold to Thor and Christine Lohrberg of Lohrberg Lumber in Waterloo.

While she described the business’ changing hands as “very different,” Diane is hopeful for what the Lohrbergs will do with Basic Industries.

She said she occasionally stops by to check up on things and offer her help, but she trusts the Lohrbergs with the business and her father’s legacy.

Roger, too, spoke positively about the Lohrbergs and their future handling of Basic Industries.

While he said it will take a bit for them to get customers back following the last few months of the business being shut down, he’s confident in their ability to oversee things.

“I think it’s going to be under good hands,” Roger said. “I think they’ll be able to continue on with the reputation we had.”

Roger added he looks forward to the freedom that stepping away from the business will bring – particularly when it comes to time spent with his wife and grandkids.