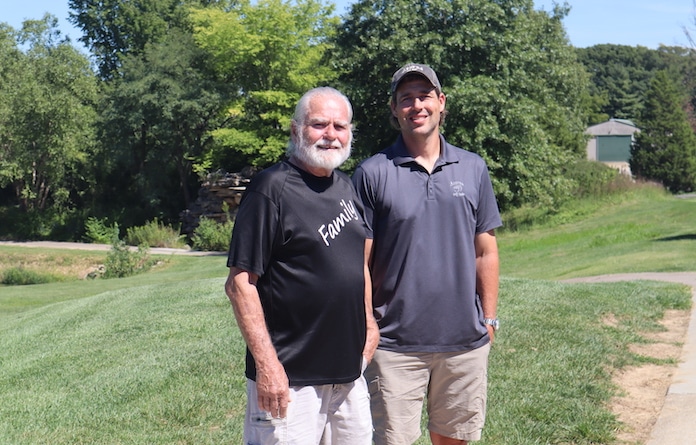 Acorns Golf Links began 25 years ago, and to this day it remains a smaller family golf course while still making its place in the community among the other courses in Monroe County.

Acorns Golf Links owner Bill Ebeler recounted the beginnings of the course alongside his son Ryan, who serves as general manager.

While Omega Products remains active since it began decades ago, Bill said he wanted to shift his focus  from that business onto a longtime dream of his in the 1990s.

“I just got kind of burnt out with Omega Products and wanted to start something else, and I always kind of dreamt of building a golf course,” Bill said. “Always wanted to design it.”

Construction on the course began in 1994, with the course finally being completed in 1997.

The work was all done in-house according to the Ebelers, who take pride in what’s gone into the course. They noted that wood used for much of the main building was sourced from trees cleared during course construction.

While Acorns stands among other Waterloo golf courses today, things were much tougher for the Ebelers’ business when it first started up.

“The early stages of golf in ‘97 were very poor in the neighborhood, in the whole area,” Bill said. “A lot of golf courses came on hand in ’97, which we saturated the market, so it was pretty hard in the beginning.”

Bill added the first 15 years of business were almost entirely an investment, with the course only seeing significant financial success in recent years.

Bill also said much of Acorns’ success happened quite recently as a result of the COVID-19 pandemic, as the outdoor sport – and less expensive course compared to others nearby – provided a good way for people tired of quarantine to get out of the house.

“COVID played a big part in a lot of this,” Bill said. “Golf courses did real well when COVID came because it was something they could do. People could go outside and play golf.”

Both Bill and Ryan spoke on the success of the course, saying it’s been able to provide them a decent living even as they put some of their revenue back into the course for improvements and upkeep.

While most of their business comes from open play, Acorns also hosts a number of tournaments throughout the year – many serving as fundraisers and some, according to Bill, raising upwards of $600,000.

Much of this success lies in the course’s place in the community relative to other golfing options in Monroe County.

He described Acorns as “similar, just not as majestic.”

Bill added that Acorns’ focus has always been on providing a good value. Their limited resources and smaller budget have kept them in check over the years.

Ryan spoke on Acorns’ success and impact within the community. Along with getting plenty of business from locals, Acorns also attracts folks from St. Louis looking for a golfing experience they can’t quite get in the city.

He said folks at Acorns like to say they help Waterloo and its businesses and organizations.

“I think the three golf courses in general, not just Acorns – all four golf courses when you count the country club – that plays a big role in getting people into the community, getting people over here,” Ryan said. “And then they see Waterloo, and I hope they visit downtown.”

With Acorns recently holding a tournament to celebrate its 25th anniversary, the Ebelers say they plan to keep the business in the family, growing and improving for the foreseeable future.

“We just keep grinding at it and that’s all we do,” Bill said. “Getting better and better every day.”

The Ebelers wished to thank the staff – both in the family and out – many of whom have been with Acorns for years.