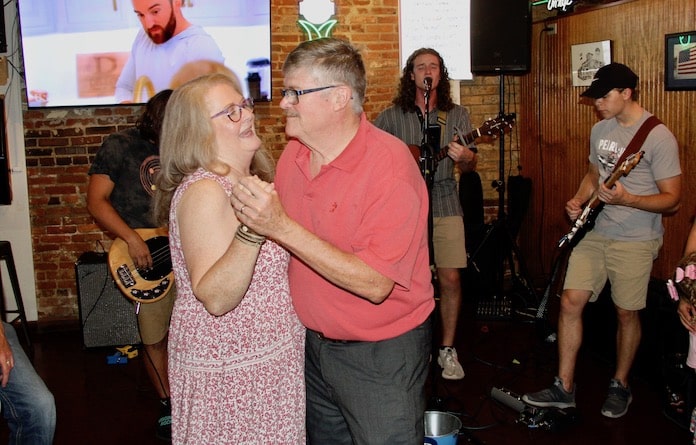 Sunday night marked the end of an era in Waterloo as JV’s Downtown Bar & Grill celebrated its last hoorah.

Jeff and Denise Vogt – soon-to-be former owners of the building and business at 117 N. Main Street – announced in late June that after more than 37 years, their business would soon close and the building would be turned over to new owners in the coming months.

While the news was not necessarily a shock to patrons, the reality of not having the Vogts helm the establishment seems a bit surreal to some.

Denise said she wants patrons to support the new owners in their journey, acknowledging it may be a difficult transition for many who have frequented JV’s for nearly four decades.

In the weeks leading up to this final farewell, the Vogts said they have been approached by countless people who have shared stories with JV’s serving as the backdrop.

But, as with all things, every beginning has an end.

“It was just time,” Jeff stated matter-of-factly during a Tuesday interview with the Republic-Times.

Jeff explained his business had been listed for sale prior to the COVID-19 pandemic shutdowns. The Vogts were approached with an offer while restrictions were in place, but Jeff said “the timing was bad,” adding “it wouldn’t have been fair to (the buyers) either.”

Instead, the Vogts decided to continue the business until being approached with a new offer earlier this year.

This time, it made sense.

In fact, most aspects of the evolution of JV’s seemed to happen organically – including the sale of the building to Jeff in 1985.

“I wasn’t looking to get into the business,” Jeff said.

At the time, he was a bartender at John’s – a tavern housed in the same building that would become JV’s.

He was also a candidate for Waterloo mayor. At the time, however, an elected official was not allowed to hold a liquor license.

The owner of John’s, Clarence “Lanny” Pottoff, offered the business to Jeff “out of the blue.”

“I went in there one day, and there were two ladies leaving,” Jeff recalled. “Lanny said, ‘I’m going to sell it to them, but I’d rather sell it to you.’”

Jeff decided to end his mayoral campaign, buy the building and start JV’s. The rest is 37-plus years of Waterloo history.

The building is a piece of local history itself. It was built in 1847 as the home of the Koechel Brewery until the mid-1870s, when the property was purchased by the Schorr family.

The Schorr family constructed the brick building that stands today – including three fermenting cellars that have been an attraction for various Waterloo history tours.

The brewery was closed in 1920 at the start of the prohibition era, but was revived as a tavern in the 1940s by J. Oscar Schorr.

Over the next 20 years, the property was owned by various people before reopening as Welsch’s Tavern around 1960.

JV’s, known especially for its pulled pork, pork steaks and other barbecue, was not a restaurant in its early years.

“We only had Tombstone pizzas” when the business first opened, Jeff remembered.

The menu and other aspects of JV’s were added “piece by piece,” the Vogts recalled.

Prior to Jeff and Denise being married in 1991, JV’s had only recently set up a dining area after successfully offering fish on Fridays – and then steak nights on Saturdays.

The barbecue JV’s is known for received a major boost as a matter of coincidence in the 1990s when the owner of short-lived Pig ‘N Poke restaurant contacted Jeff to see if he would be interested in buying his Southern Pride smoker.

The Vogts purchased the pit, making the process of creating JV’s signature pork flavor much easier.

Denise shared that the JV’s BBQ sauce recipe came from one of her childhood friends from Mississippi.

Another JV’s tradition of a corned beef and cabbage buffet on St. Patrick’s Day also began by happenstance.

When the new Harrisonville Telephone Company headquarters opened on Main Street in 1995, the Vogts were asked to provide corned beef during several open houses on different days. With Jeff slicing the beef and Denise also serving on the line, the couple decided to offer the same set-up at their restaurant every March 17.

The newest owners will continue the tradition of having a gathering spot on North Main Street when their business opens at what will then be the former JV’s.

While the final papers still need to be signed to make this sale official, it has been reported the new owners intend to keep the building closed for a few weeks for renovation before reopening as a bar that caters to sports fans.

In that regard, the transition will be somewhat easy, as JVs had become a popular destination to watch St. Louis Cardinals games and other major sporting events like the 2019 Stanley Cup run by the St. Louis Blues and the Super Bowl era of the St. Louis Rams at the turn of the century.

The Vogts also recalled JV’s being the post-game hangout for many attending Gibault home basketball games and Waterloo High School football games – especially when the games were played on the old WHS field off Rogers Street.

While Route 3 still ran along what is now Market Street, JV’s even became a destination for Red Bud sports fans returning from away games.

But JV’s was much more than a destination to recap local sports. The business was host to many milestone events such as wedding receptions (including Jeff and Denise’s) and birthday parties and even memorial celebrations in addition to providing meeting accommodations for the Waterloo Optimist, Lions and Rotary clubs.

The real essence of what made JV’s special is the connection made with patrons who always felt welcome and the staff that created the atmosphere.

Above all, it was a place for friends to gather.

Only a small fraction of memories from the past 37-plus years were expressed Sunday night during a farewell celebration that appropriately lasted well into the late-night hours.

“We’ve had people share stories that we’d never heard before,” including memories from people the Vogts have never met, Denise said of the overwhelming communication received in the last month.

To share all the fond memories of JV’s would “turn into a novel,” Denise recently wrote in a thank-you letter to friends of JV’s.

In the near future, Denise plans on spending more time with grandchildren.

Jeff says he will get back to participating in different groups – the Kaskaskia Trail Chorus barbershoppers and Beaver Lake Fishing Club specifically – that he didn’t have time to devote to while giving his business the attention it deserved.

If you want to hear stories about the kids sneaking downstairs to raid the kitchen when the Vogts lived above the restaurant, Jeff running down Main Street untying his apron to assist the fire department when a call went out, or anything in between, the Vogts will still be around.

“We’ve had people tell us they’re going to miss us,” Denise said before clarifying that they “aren’t going anywhere.”

“We’ll still be around – just on the other side of the bar,” she said.