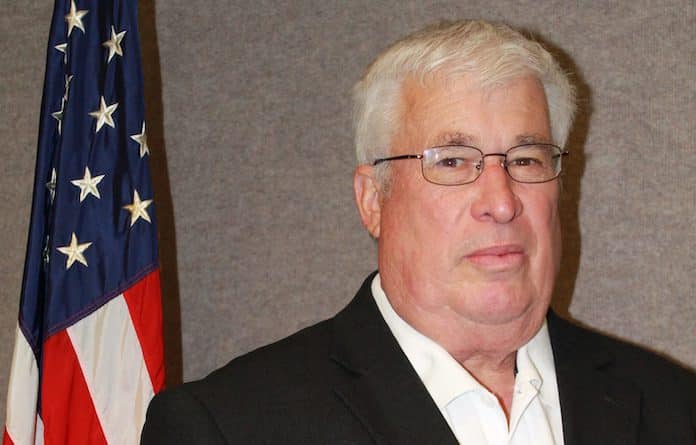 To the surprise of many, Waterloo Mayor Tom Smith  returned to his usual seat in the council chambers at City Hall to preside over Monday’s meeting of the Waterloo City Council.

“I’m proud to be the mayor of Waterloo,” he said, taking time at the meeting to thank city officials, neighbors, friends and all others who stepped up to handle extra duties in his absence. “I have great doctors, great nurses, great neighbors… I thank you for all the prayers and the cards.”

This was just days after returning home from the hospital following a stroke Smith had sustained in late May.

Alderman Clyde Heller – who has been serving as mayor pro-tem during Smith’s recovery – gave an update on Tuesday that Smith made a medical visit after experiencing congestion and returned to the hospital for observation.

Heller said he will remain mayor pro-tem and continue to fulfill duties of that office whenever Smith is unable to as he continues on his road to full recovery.

“He was very excited to make an appearance last night,” Heller told the Republic-Times on Tuesday.

Alderman Steve Notheisen said this resolution was proposed following statements made in a paid letter in the July 6 issue of the Republic-Times from Uncle John’s RRR Bar owners James and Jered Gallagher in the wake of an agreement made between the bar and the city that allowed its annual liquor license to be renewed with a 10-day suspension and other conditions.

“This came about because the RRR Bar (hasn’t) accepted responsibility for (it’s) bad behavior,” Notheisen said. “After the settlement between the city and RRR Bar, they had to come back and say they were treated unjustly and they were just exercising their First Amendment rights and that we had done them wrong. It’s sad that they continue to believe that the things they did were proper, and they weren’t. They’ve embarrassed the city. They’ve embarrassed their neighbors, and they’ve failed to take responsibility for their bad behavior. That’s why we’re showing our support tonight for Chief Prosise and the other Waterloo police officers.”

Several of the citations issued to those involved with RRR Bar – which have since been dismissed as part of the agreement – dealt with violations of the city’s noise ordinance.

Aldermen on Monday approved an amended noise ordinance for the city that defines excessive noise and the measurement of sound levels.

Per the revised ordinance, only members of the police department or other city employees authorized by the police chief or code administrator may obtain sound levels to determine compliance.

“The maximum permissible sound levels of any continuous source of sound within the City of Waterloo shall be 70 decibels,” the ordinance states.

Sound levels are to be measured from the location where the complaint has been made at a height of approximately 48 inches above the immediate surrounding surface, per the ordinance, with a sound level meter.

Exemptions include city sponsored or city sanctioned events, motor vehicles operating on public roadways, and vehicles and equipment operated by the city.

Lastly, the city council has the power to grant a variance to these new noise ordinance requirements.

“We also added some safety issues in there,” Smith added. “They have to be checked before, because we didn’t know if we have people coming in from outside of the state. We didn’t know who was coming in and going to our subdivisions.”

Krebel agreed, adding that these types of businesses will have to obtain a solicitor’s permit prior to operation.

Also at the meeting, the council approved the purchase of 60 25 KVA (1,000 volt amps) single phase padmount transformers for its electric department in the amount of $175,500.

“I think it’s a good time to buy these,” Waterloo Director of Public Works Tim Birk said, adding it takes about a year to get these types of transformers in.