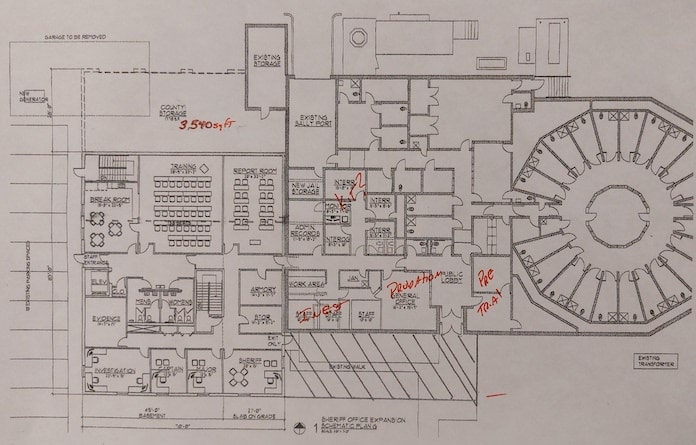 Implementation of the SAFE-T Act at the beginning of 2023 has caused a change in philosophy regarding expansion plans at the Monroe County Jail in Waterloo.

Monroe County Sheriff Neal Rohlfing brought a pared-down proposal to Monday’s meeting of the Monroe County Board of Commissioners.

“With the new SAFE-T Act, we have forgone the previous plans where we were going to do additional jail bed space and utilize some of the area in the back side of the jail as an administrative office,” Rohlfing began.

“With the new law taking effect Jan. 1 where 99 percent of the people we deal with will not go to county jail, I really don’t see us needing any additional jail space at this time,” he continued.

Rohlfing said there was much uncertainty about the elimination of cash bail at the beginning of the year, with some speculating jails will be full after eight months to a year, although he said it would probably not be the case in Monroe County due to a lack of violent crime in the area.

In late 2020, a $14 million expansion plan was introduced which would have created separate male and female inmate cell blocks among other needed infrastructure improvements.

While that plan had already been reduced dramatically to an estimated $2.86 million price tag in June 2021, the latest proposal drops the cost to approximately $2.47 million.

The biggest cost-saving measure in the new proposal is a reconfiguration of administrative office locations which, with proposed additional square footage added on the northwest corner of the existing building, would double the size of stage space and eliminate the need for a separate building.

Rohlfing explained the previous plan called for a climate-controlled storage shed to be built as a storage are for Monroe County Health Department and Emergency Management Agency equipment.

Another benefit of the new expansion design, the sheriff said, is inclusion of office space for additional probation personnel and pretrial services – both of which are required as part of the SAFE-T Act.

Rohlfing told commissioners it would make sense for the personnel to be housed at the jail since interviews must be conducted as a condition of pretrial release.

He also noted extra space would then be available at the courthouse to facilitate additional judges and state’s attorneys in the building when Monroe County becomes part of the new 24th Judicial Circuit on Dec. 5.

Another facet of the new plan would greatly increase safety and security of police evidence held at the jail.

Evidence is currently kept in an area shared by a staff break room. Rohlfing noted evidence would be kept in a separate, sequestered room after remodeling.

While these plans were only for discussion purposes, county board chairman Dennis Knobloch said he likes the plan “better than the double approach” previously proposed.

Other future plans for the jail were discussed  but the focus was primarily on initial expansion to “complete” plans for the first floor of the jail.

If the plan were approved, Rohlfing estimated work could begin in late 2023 and be completed sometime in 2024.

In other county board news, Donovan Melican, owner of the Outsider tavern in Waterloo, was on hand to discuss rapidly-growing crowds during the weekly Queen of Hearts drawings on Tuesday nights that benefit Ss. Peter & Paul Catholic School.

The jackpot for Tuesday’s drawing neared $300,000 with no winner as of yet.

Commissioners requested Melican’s attendance to revise an agreement which allows use of the adjacent county-owned parking lot and add use of the courthouse lawn to the agreement as an increasing number of people congregate there before and during the drawings.

Melican said he walks the courthouse grounds every Tuesday night, but most attendees “police themselves” and littering has not been an issue.

Monroe County Maintenance Supervisor Joe Lewis confirmed there have not been any issues thus far with the Tuesday night crowds on the courthouse lawn.

The board also passed a resolution agreeing to a Southwestern Illinois Planning Commission contract proposal in the amount of $23,000 as the initial step in an effort to create a new county comprehensive plan.

Knobloch said there would be more clarity about the scope of the plan after a meeting Friday with the Monroe County Economic Development Corporation.

Knobloch said officials in  Waterloo and Columbia have expressed interest in working with the county in development of a plan.

At the beginning of the meeting, University of Illinois Extension 4-H and Youth Development Coordinator Kelly Brandt and local 4-H representative gave an update of the county initiatives during the past year.

The board signed similar proclamations in recognition of “Home and Community Education Week” Oct. 10-15 and the whole of October “Domestic Violence Awareness Month” in the county.

The next board meeting takes place Monday, Oct. 17, at the Monroe County Courthouse.