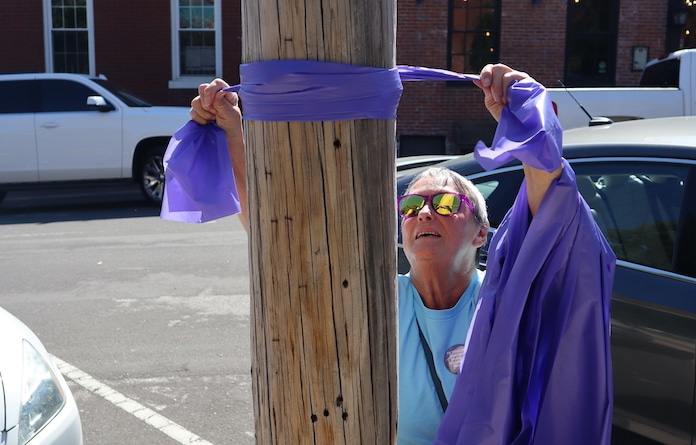 Residents throughout Monroe County can expect splashes of purple to appear  this month in an effort to raise awareness of domestic violence.

October is Domestic Violence Awareness Month, and the Violence Prevention Center of Southwestern Illinois has organized a new initiative they call “Paint the Town Purple.”

Violence Prevention Center Director of Development Melissa Tutterow described the initiative as a way for anyone in the community to help raise awareness for the tragic cause that is more widespread than many might think.

As purple has become associated with domestic violence awareness, Tutterow said her agency is encouraging anyone to show their support with displays of purple.

“We are asking businesses, government buildings, neighborhoods to do whatever they think is good for their business, their situation, to just shine a light on domestic violence,” Tutterow said.

The VPC is also offering brochures and sample information for businesses to make available alongside any displays they might make.

As an organization, the VPC works throughout the year to, as Tutterow said, eliminate domestic violence in the lives of individuals and society as a whole.

The organization offers free and confidential services that include access to an emergency shelter, a 24-hour crisis hotline, legal advocacy, counseling and community prevention and education.

On top of its usual activity, the organization gets especially busy during October in order to properly recognize the month.

“We set aside the month of October to raise awareness and help support survivors and honor victims of domestic violence,” Tutterow said.

She added the VPC will be setting up “silent witness” displays at both the Monroe County Courthouse and Morrison-Talbott Library. There will also be clothesline projects in town created by domestic violence survivors of varying ages.

Tutterow explained that the clothesline projects are T-shirts painted by survivors responding to such questions as “What does peace mean to you?”

The VPC is also organizing a free community screening of “Donna Stronger Than Pretty,” which Tutterow described as a film about a survivor and their journey to safety as they find their own voice.

This screening will take place at 6 p.m. Oct. 25 at Hope Christian Church in Columbia and will be followed by a community discussion on how to help and address domestic violence.

Tutterow added that the VPC is also launching a new program called “Purple One” to help teach communities how to recognize domestic violence and help refer victims to needed services.

Members of the VPC along with a number of area scouts spent Sunday afternoon in downtown Waterloo tying ribbons around street poles for the initiative.

VPC Board Member Kay Clements of Waterloo  led the gathering and shared some of her thoughts on the importance of domestic violence awareness.

Clements said she originally got involved with the VPC several years after her daughter was shot and killed by an abusive boyfriend in Omaha, Neb.

Following her murder, Clements was shocked at the lack of resources available for those in a situation similar to what her daughter had experienced, prompting her to get involved in spreading awareness.

“I started talking about teen dating violence because that’s what she was going through, and there was nothing out there,” Clements said.

Donjon said Columbia saw a sharp spike in domestic violence occurrences at the start of the COVID-19 pandemic that has gone down slightly since. Prosise said the number of occurrences between this year and the last has remained similar.

Both police chiefs also spoke about the responses their departments have to domestic violence cases, with offenders being arrested and disallowed access to victims who are offered access to various resources in the community while also being encouraged to reach out to the VPC.

Prosise also spoke about the fact many domestic violence calls his department receives tend to be repeat offenses.

“What ends up happening a lot of times is that we are called back again, it could be a week later or days later or a month later for a similar situation,” Prosise said. “If they’ve done it once, they can do it again.”

As she described the plans the VPC has for October, Tutterow also emphasized the importance of raising awareness for domestic violence victims.

The “Paint the Town Purple” initiative serves to both raise awareness in the community and help victims know they’re not alone and can reach out for help – both of which can be vital given how people tend to distance themselves and their communities from the widespread issue of domestic violence.

“In general, domestic violence, we don’t necessarily talk a lot about it. Unfortunately, there’s a lot of shame surrounding it, so survivors don’t necessarily talk about it either,” Tutterow said. “Sometimes, I feel like communities can get this sense that maybe it’s not happening around them. And I think that months like this allows us to do these widespread efforts to make sure that communities know that it is a problem.”

The Violence Prevention Center’s 24-hour hotline can be reached at 618-235-0892 and is available to answer questions and for those simply looking for a sympathetic ear.