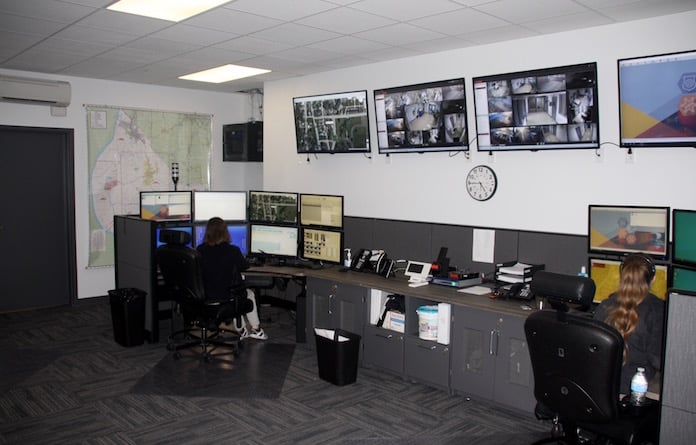 Monroe County Public Safety/EMA Director Kevin Scheibe spoke about the various renovations and how they will improve the dispatch center’s service, saying the project is “something that I’m really proud of and honored to do for the county.”

Scheibe said he and other county officials had started planning these improvements when he was appointed to his director position in February 2020.

At the time, the office only had two stations for dispatchers – a number Scheibe said wasn’t enough given Monroe County’s population.

“We are one of the few counties in the state of Illinois that’s growing, so that’s something to be proud of,” Scheibe said. “But as a county grows, you need more people to take care of our citizens.”

Plans to move these operations into the basement of the Monroe County Courthouse were originally meant as a future undertaking, but were accelerated as the COVID-19 pandemic began shortly following Scheibe’s appointment as director.

“A long-term goal turned into an immediate action that had to be done for the simple reason of COVID,” Scheibe said. “It was just an unsafe situation there.”

With the move and increased working space, among the first improvements made was a dispatch responder addition.

Scheibe said the office now has three desks for responders with a fourth currently in the works.

Scheibe also spoke to the importance of the dispatching team, both in regard to how the office needed room to grow and the role emergency dispatchers play for the county every day.

According to Scheibe, county and Columbia dispatchers combined to respond to over 46,000 calls last year. While many were likely calls about the same emergency, it’s still a tremendous amount of work and responsibility for those who do the job.

“911 dispatch, they are the front line,” Scheibe said. “They are the ones that are going to help us determine what we have to do while we’re en route to a scene. The 911 dispatch teams, they’re amazing. They have to multitask, and they’re the calm behind the scenes. When you call, you’re excited. They’re trying to keep you calm, and that takes a special person to do that.”

The office has also been able to complete or make progress on much of the technology and equipment that goes into responding to calls and organizing public safety departments.

One of the biggest changes Scheibe mentioned concerned a much improved 911 system called ESInet, which is part of a system being pushed statewide called Next Generation 911.

Among the improvements ESInet brings are better call times. Scheibe said the two to three seconds it takes to connect calls being reduced to just two-tenths of a second can have a real impact when dealing with emergencies.

ESInet also allows for vastly improved accuracy when trying to locate calls made via cellphone. Scheibe said the improvements allow for accurate location in a range of 50 feet while also being able to determine what floor of a building the caller is on.

GeoComm is another addition to Monroe County’s dispatch center that provides dispatchers information on emergency responder locations throughout the county.

Scheibe said GeoComm mapping shows such information as hydrant and gas locations as well as where emergency vehicles are in order to maximize response efficiency.

Still another tech addition is Solacom, which allows dispatchers to respond to text messages.

Scheibe also mentioned improvements being made with AT&T and other carriers to help improve issues with 911 calls going to towers outside of the county – specifically when calls are made along Bluff Road.

Scheibe spoke highly about all of these additions, as did Rohlfing, who expressed that Monroe County is well beyond its neighbors in regard to 911 capabilities.

“We are the most up-to-date and advanced 911 center in Southern Illinois at this time,” Scheibe said. “So, I’m very proud of that.”

With the additional space provided by the move to the courthouse, the county’s Emergency Operations Center has also received improvements that were completed very recently.

The biggest improvement for the EOC is simply in the much greater amount of space available. Scheibe said Monroe County has always had an EOC, but its operating space was quite limited and often used for activities beyond its intended purpose of emergency management and training.

Funding for these improvements came primarily from state 911 revenue – fees everyone pays when landline or cellular phones are used. The other part of funding came via budgetary monies from taxpayers, Scheibe said.

Funds for the EOC came from the American Rescue Plan Act, with Scheibe also applying for a number of grants for both offices.

Rohlfing specifically mentioned the contrast between the older, cramped space and the capabilities of the new office, commending Scheibe for his efforts in improving the dispatch center to meet the needs of the county.

“Kevin has done an outstanding job just being on top of things,” Rohlfing said. “He puts in the time and effort to make sure there’s a high level of public safety for our residents.”

Scheibe expressed his hope that county residents feel both happy and assured of their safety with these dispatching upgrades.

While improvements are still being made – some are set to be completed in the near future with others planned for further down the line – Scheibe prides Monroe County dispatch as being among the most advanced in the state.

“Monroe County should be proud of what we have for them,” Scheibe said. “We hope they’re proud, and they need to be aware of what Monroe County is doing for them as far as on the law enforcement, 911, first responders side of things.”