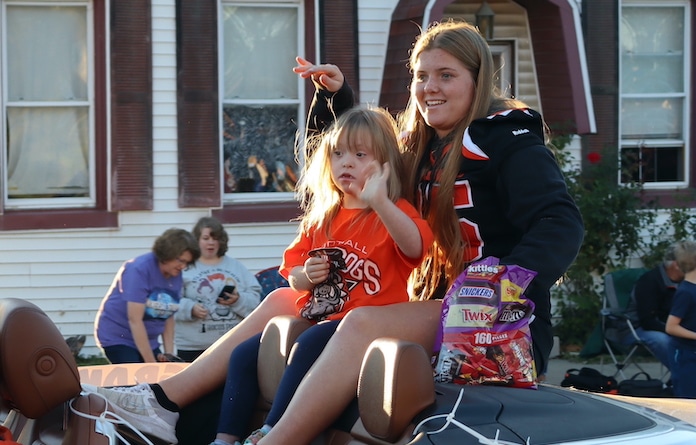 Two friends who have become popular faces in town over the past few weeks made a grand appearance in last Wednesday’s Waterloo High School Homecoming Parade.

WHS senior Lexi Stephens and Zahnow Elementary student Jamisan Sanders served as grand marshals for the parade, but many might have recognized them from their recent appearances at high school football games.

Stephens has stood out as a star kicker for the team again this year after earning all-conference accolades last season.

When she decided against pursuing college soccer the summer before her junior year, her parents encouraged her to find a job or another sport to occupy her time in the fall.

Eventually, her mother suggested she give football a try.

“My mom was like ‘Why don’t you try football? You could be kicker,’ and I was like, I almost laughed at her,” Stephens said.

Despite her reservations, Stephens’ coordination and skills she’d picked up in soccer served to impress both her father – a football coach at Belleville West – and the coaches at WHS, and she’s since shown herself to be a standout for the team.

She also stood out last summer when she caught the attention of 7-year-old Jamisan.

She was originally at WHS to participate in a cheerleading camp this summer, but Jamisan’s mother Robin Sanders said she seemed to be far more interested in all the running around going on at football practice nearby.

Waterloo Athletic Director Brian Unger said likewise – though he added Jamisan really started paying attention to the team when she was told they had a female playing.

“Our cheerleaders were like, ‘Hey do you wanna go over and talk to some of the football players,’ and she was like, ‘no no no,’ until she found out we had a girl playing football in Lexi Stephens,” Unger said.

Stephens and Jamisan hit it off right away, and while the whole team took Jamisan in as one of their own – with quarterback Aidan Morrow in particular taking a shine to her – the two girls have grown especially close.

Jamisan has since appeared at several practices to watch Stephens and the rest of the team at work. She’s even been recognized as a guest of honor at a home game or two, finding Stephens in the locker room and leading the Bulldogs out onto the field.

With how close and popular the two have become, Unger said it only made sense to give them a place of prominence during the homecoming parade.

“We thought there’s probably no better two people we can pick than those two that kind of embody everything we want out of Waterloo athletics,” Unger said.

As Stephens attested, the parade proved to be a wonderful experience for both of them. The two could be seen driven by Jamisan’s parents, waving and tossing candy with plenty of smiles.

“Grand Marshaling was honestly the coolest experience I’ve ever had,” Stephens said. “I personally have never been in something, I feel like, as big of a deal as that, honestly. I was so honored to be a part of that in general, and then also just to be a part of that with Jamisan. She was laughing and having the best time of her life throwing out candy to little kids. It was so cool. It was unreal.”

Sanders’ mother spoke similarly of the event, saying how glad she was that Jamisan – who lives with type 1 diabetes and Down syndrome – was able to participate in the parade given some of her health limitations.

She also spoke positively about the relationship Jamisan has been able to develop with the WHS football team – particularly the sisterly relationship she now shares with Stephens.

“They don’t look at her that way,” Robin Sanders said. “They look at her as Jamisan and not a child with special needs, and to us that’s just the greatest thing in the world that she doesn’t get judged and doesn’t get looked down upon … she’s just one of them to the whole football team.”