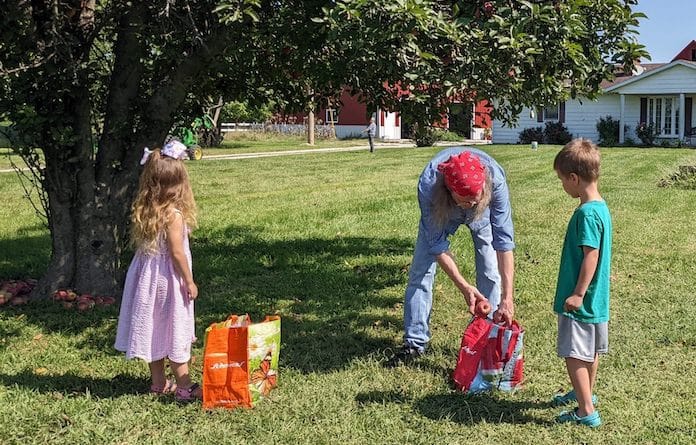 Maeystown is celebrating a local tradition once again this year, bringing the community together through apple butter for its upcoming Oktoberfest celebration this Sunday.

The making of this locally famous apple butter began Sept. 23, with volunteers gathering for peeling and dicing of about 22 bushels of apples from 8 a.m. into the early afternoon.

The event continued Sept. 24 with participants gathering at 6 a.m., stirring and canning apple butter through 3 p.m.

Marcia Braswell of the Maeystown Preservation Society reported that the weekend as a whole went well as far as turnout and productivity.

“I think the apple butter cooking was fabulous,” she said. “I think everything went really, really well and they had tons of help.”

Her husband David Braswell also spoke positively about the weekend.

David was present for more of the gathering and reported that participants were able to cook up over 375 jars of apple butter.

“In the last three or four years, this was probably the best preparation we’ve ever had with the apple butter,” he said.

The event supports the Maeystown Preservation Society. David said the cooking, which originally began in 1980, was started to raise funds in order to buy the mill, which now houses the village museum.

That tradition has continued 42 years later, with such faces as Joanne Goeddel – who housed the first apple butter cooking – making an appearance.

The event has grown in that time, though David says it has very much maintained its roots.

Friday’s work makes use of antique peelers and devices meant to make the dicing of the apples much easier, and Saturday’s cooking involves several antique copper kettles – some over 100 years old – as well as a number of specially-made apple butter stirrers that have been acquired over the years.

“We like to say we do it the right way, we do it the old-fashioned way, and we like it that way,” David said.

This year’s apple butter canning also saw two unique twists with locals offering to help out one way or another.

Ruby Fausz of Columbia reached out to the preservation society to donate 181 quart canning jars after hearing about the event in a previous issue of the Republic-Times.

David recalled picking up Fausz’s dozens of jars, boxes upon boxes loaded up to fill the bed of his truck.

Marge Woolard, who lives near Camp Wartburg on LRC Road, also reached out to offer some of her own apples.

Though the preservation society had already acquired enough to see their canning through, this allowed a local home schooling group to have an apple butter experience of their own.

Emma Hosfeld, who teaches for the Wild Roots Community group, brought some of the students to Woolard’s home to pick apples and pears and cook some crock pot apple butter.

“The kids had so much fun climbing the ladder,” Emma Hosfeld. “There were more apples than we could pick, and their favorite part was learning to use the peeler and making apple butter.”

Students from Rooted Learning Co-Op, an offshoot of Wild Roots, also met for the event. Hosfeld said both groups are centered in Waterloo.

The Maeystown apple butter tradition continues over four decades later, bringing folks from Maeystown, Waterloo, Belleville, Valmeyer and elsewhere together for a weekend.

David spoke quite passionately about the event, painting a vivid picture of early Saturday morning with the sun rising, the sounds of chickens and roosters, the nearby creek bubbling and the crackling of the cooking fires going.

He also discussed the importance of the event as a tradition and gathering for Maeystown and the area.

“To me, the apple peeling and apple stirring is more than just an opportunity to raise money for the museum,” David said. “It’s much more than that. It’s neighbors meeting neighbors. It’s people from other communities making friends. It’s people having a good time, volunteering their time to work together for a worthy cause which is the preservation of the history of Maeystown.”

While the weekend’s participants are able to reserve apple butter, the public can purchase their own jars at Maeystown’s Oktoberfest this Sunday.

David said the apple butter tends to run out by about noon, so get there early.