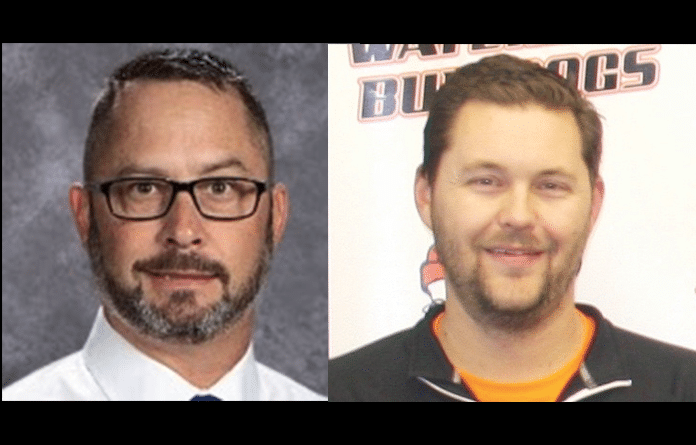 Seemingly ever-changing protocols have rocked high school sports for the past two years.

Yet, local athletic personnel say things are starting to get ‘back to normal’ even though much disruption remains.

When the pandemic forced the state to shut down in spring 2020, high school athletics were no exception.

“A lot of our coaches were giving our kids workouts and things to do, but we couldn’t meet as a group,” Columbia Athletic Director Scott Horner said. “The kids were doing them – if they were doing them – at their house basically as everything was pretty much shut down.”

Horner explained for senior athletes who played spring sports, this meant what they had been working for the last three years was gone in an instant.

As Illinois slowly started opening back up, so did the world of high school sports. This was not without difficulty, though.

“The inability to prepare, the inability to practice, I think created some issues with our kids,” Horner said. “They weren’t quite as prepared as maybe what they have been in the past, and so subsequently at times their performance wasn’t up to their standards. That was challenging for them.”

For the fall 2020 season, only golf and cross country could resume a somewhat regular schedule.

“They were outdoors and they were the only ones where social distancing was much easier than what it would be for let’s say boys soccer because people are fighting for a soccer ball. It’s the same with football – everybody is in groups all of the time,” Horner said.

This caused the remaining fall sports to be played in the spring following a winter sports season, with traditional spring sports moved to early summer and athletes grappling with shorter seasons.

Horner said for some, limited playing time could have made it hard to stay motivated.

“Everything was moved into the spring season, so it created a lot of challenges with scheduling,” Waterloo Athletic Director Brian Unger said. “There was an overlap of seasons. We had a basketball game on a Saturday and the following Friday was our home opener for football; it was our first football game. Normally you have some down time in between there for athletes to get from one sport to the next.”

Both Waterloo and Columbia have many multi-sport athletes. To survive spring 2021, coaches scheduled practices around other sports’ games.

Between this and the threat of illness, schedules were more fluid than ever, causing a huge disruption to athletic directors’ normal timelines.

“In the athletic directors’ world, we work a year in advance. With schedules changing so rapidly and suddenly, putting together schedules that you need to have in two weeks creates a challenge in itself,” Horner explained. “But everybody rallied, I got a lot of help from the coaching staff here with the schedules. There were late nights, but they were for the right reasons. We were able to get back on the field, which is what they wanted and what we wanted for them.”

Stringent protocol made it so athletic directors and coaches had more paperwork to attend to.

“Last year, we were contact tracing basically every day. Our coaches had to have a list for us of who was at every practice, they had to check them in and (ask) all the COVID questions, we took temperatures, we did all those things last year before practice even started,” Unger said.

Earlier this academic year, athletes did not have such intensive daily certification that they were not exhibiting symptoms. Masking was required for all indoor and outdoor sports – except wrestling, as this poses a safety hazard, Unger said.

This discrepancy can make protocol in the event an athlete tested positive vary from sport to sport.

“It kind of depends on the sport,” Unger said. “They can come back after five days of quarantine but then they have to wear their mask for the next five days. With a sport like wrestling, you can’t wrestle with a mask on, so if a wrestler comes up positive it’s a little bit different than a volleyball player or a basketball player.”

Unlike in past pandemic years, student-athletes had to quarantine if they were a close contact only if they were unvaccinated, unless they showed COVID symptoms.

“If one of our athletes were to get it, it no longer means a complete shutdown of the program, which is nice,” Unger said.

Waterloo Superintendent of Schools Brian Charron said that, as of press time, IHSA was still taking the ruling under advisement and determining how to change its mitigations to reflect it.

For practices and games at Waterloo and Columbia, this means athletes would have the option to mask up.

“At our school, masks are optional so masks will be optional when we play (sports) at home,” Columbia Superintendent of Schools Chris Grode said. “We will follow the expectations at other schools based on their rules.”

Based on the ruling, Waterloo and Columbia have also decided they will not be excluding athletes based on them possibly being close contacts. Charron made it clear, however, that somebody who is COVID-positive and symptomatic will not be allowed to be at school or school functions.

He said the district strongly recommends, in accordance with CDC guidance, that one who tested positive wear a mask for five days after their quarantine period.

In addition to shortened seasons, high school sports have had to limit fan attendance. So far this year, Waterloo schools have not had to do this, which WHS head boys basketball coach Allen Siedle said has made quite a difference.

“You can see it in their face – they’re just happy to be playing basketball right now, especially with the cheerleaders and the band in attendance, that is a little bit different from the previous year as well,” Siedle said. “It’s just nice to have your family and your friends come and see you play. Here at Waterloo, we have a fantastic cheerleading team who supports us a ton and an awesome band as well, too, so when the band comes to our games and plays, it’s just a different atmosphere. It makes it fun for the guys.”

Still, many facets of sports experiences are clouded by the continuing pandemic.

Horner said Columbia has been struggling to find enough referees for games and, likewise with Waterloo, dealing with transportation issues.

“There were times when we were taking two busses to events when we had 20 or 30 people that we had to travel with because we wanted to be able to space them out on the busses in case there was a positive case so the other kids wouldn’t be at risk of being a close contact,” Horner said. “Then on top of that, you had issues with drivers. Many of our bus drivers … are elderly (and) sometimes those people, especially if they had underlying health conditions, were at a little bit more of a risk and they weren’t willing to take that risk. So, we were very limited on our buses.”

Horner said this sometimes resulted in parents driving athletes to contests and sometimes athletes had to drive themselves.

“Sometimes you can’t bring your full roster because there aren’t enough seats for all the kids on the bus,” Guercio said. “It requires the coaches to drive those buses, too, which that’s not too bad, but I know that our athletic directors had to work a lot with rescheduling bus times and calling other athletic directors to see if we could show up later.”

Coaches are also having to change practices and game day procedures to accommodate the pandemic.

“In the past, I might have different kids move around the room and train with a number of different partners just so they can get a feel for the different styles of kids. Now, it’s like we had to have a set of three-person groups. Throughout the whole year, you stay with those three people because that way if somebody does test positive, you can look and talk to the administrators and say ‘these are the only two people they were in contact with during practice,’” Guercio said. “It helps to slow the spread and it makes for easier contact tracing as well.”

Guercio said he hopes the benefits outweigh the costs of this change.

“With any sport, everybody has their own different style and strengths, so you just hope whenever you match them up … that the couple of kids who are in their group can expose them to enough different techniques to where when they actually go into competition, they’ve seen different styles and can adapt to it,” Guercio said.

While basketball does not allow for minimizing close contacts in this way, Siedle said by scheduling conference games for all levels on the same night, Waterloo boys basketball is able to more easily track potential spread of COVID.

“If they find a positive test, (the athletic director) can really see and trace who they could have possibly spread the virus to,” Siedle said. “They do a great job … of just trying to get ahead of it so we don’t have these big spreading cases of COVID.”

While both athletic directors and coaches applaud each other for their efforts to keep sports going during the pandemic, they also acknowledge the resiliency of the athletes.

“The kids have done a phenomenal job of making the (protocol) changes and always having a good attitude,” Siedle said.

This is even more impressive when one considers how the pandemic may have changed athletes’ collegiate plans. As Horner explained, recruiting was altered by the pandemic, with coaches relying on video to judge how a prospect would fit into their team.

“Then you had the issue of the NCAA and NAIA schools and everybody allowing kids to have an extra year of eligibility. So from that standpoint, what might have been a scholarship opportunity for a kid might have gone away because they had to keep that scholarship for a fifth year returner or a sixth year returner that had been at their college,” Horner said.