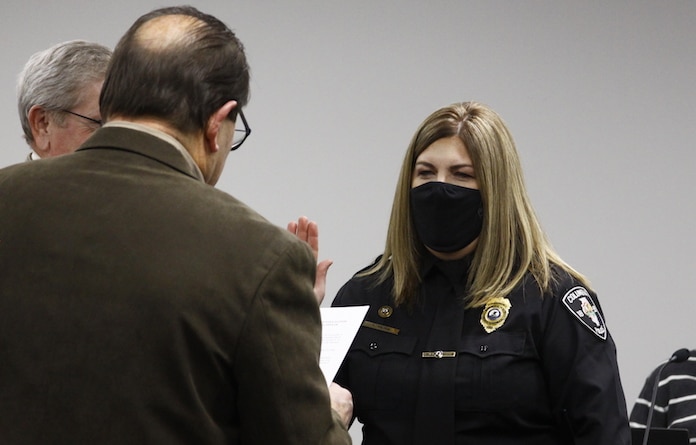 Columbia Police Department Deputy Chief Karla Heine knew she was going to be a police officer as early as sixth grade.

“I was always interested in murder shows” and the investigations that followed, Heine said.

Heine had just begun her law enforcement career in 1995 with the Cahokia Police Department when she was already asking about being assigned to the Major Case Squad of Greater St. Louis that investigates homicides.

“They told me I needed to gain more experience before I would be considered for that,” Heine recalled.

Twenty six years later, Heine has had the opportunity to work with the multi-jurisdiction homicide unit and is currently the squad’s second in command.

She was recently promoted to deputy chief in Columbia, taking over that position when current Columbia Police Chief Jason Donjon replaced former chief Jerry Paul, who retired at the end of January.

Heine, a 1987 Columbia High School graduate, admitted she was hesitant about returning to her hometown after attaining a criminal justice degree. She thought it would be strange to be a police officer for people she grew up around, but she has no regrets about joining the CPD in 2004 after nine years with Cahokia.

She has an accomplished career and service record since joining Columbia’s police force. In addition to her latest promotion, Heine spent nine years as part of an FBI cybercrimes task force that focused on crimes involving computers and child exploitation.

She is currently commander of the Monroe and St. Clair counties division of the Child Death Investigation Task Force and also director of Columbia’s domestic violent crime unit.

When asked how someone who has seen the worst in humanity can remain so positive and optimistic, Heine gave two explanations.

The first is that an officer has to “have an even balance” of work and personal life.

“I have a lot of support from home from my husband and family. We love boating and family time. You have to step away (from work) sometimes,” she said.

Heine also said she is motivated by “how to help the victim instead of focusing on the bad guy.”

She recalled one case she investigated in which a person who had been a victim of abuse for 35 years was finally given relief through the justice system.

“She thanked me for believing in her, telling me that no one has ever done that before,” Heine said, crediting such examples as what preserves her drive and dedication to helping others.

When dealing with suspected criminals, Heine says “there’s always a ‘why’ behind someone doing something,” and that many times criminal action is the result of personal circumstances.

“When you look at  those things, everyone’s human,” she continued, saying that people deserve to be approached with that level of  understanding.

Heine also credits a “very personal connection with the community” as a reason she can remain upbeat.

“I cherish these relationships,” she said.

“When a crime occurs in Columbia, there is always outreach and support from the citizens,” Heine said, noting that Columbia is special in that regard.

“You don’t get that (level of community involvement) everywhere,” she continued, “that’s how we solve crimes – through community outreach. Sure, there’s other things (police officers) do, but they are a tremendous help” with providing statements and offering home surveillance footage among other aids.

Heine also noted she has had a wide range of experiences, “some good, some bad,” during her tenure in Columbia.

One experience she recalled vividly was her involvement as an investigator in the Christopher Coleman triple homicide case.

“No one can forget (the Coleman) case. It shocked this town,” Heine said, adding it was a stark reminder that “there is evil in this world.”

On the lighter side, she most fondly remembers her time as a Safety Town instructor, something she helped implement in 2005 after being assigned to study how the nationwide program was being conducted in O’Fallon, Mo.

Since then, the program has grown from a one-week summer child safety program with a few dozen attendees to a two-week course teaching personal safety practices to over 100 youngsters at a time.

“It took off very fast. In 2005, there were 28 kids and in 2006, attendance tripled,” Heine said, reflecting that she still feels a sense of accomplishment when she sees lessons being put into practice by former Safety Town students.

Heine retired as Safety Town leader in 2018 to allow a different officer the opportunity to have the experience.

She says her main goal as deputy chief will be the same as it has been since she began dreaming of becoming a police officer in sixth grade.

“First and foremost, my duty is to protect and serve,” Heine said, pointing out that she and Donjon, who also helped with Safety Town beginning in 2009, “think a lot alike.”

She clarified by stating they both share the goal of “maintaining relationships” with the community and continuing the sense of cooperation that Paul helped establish.