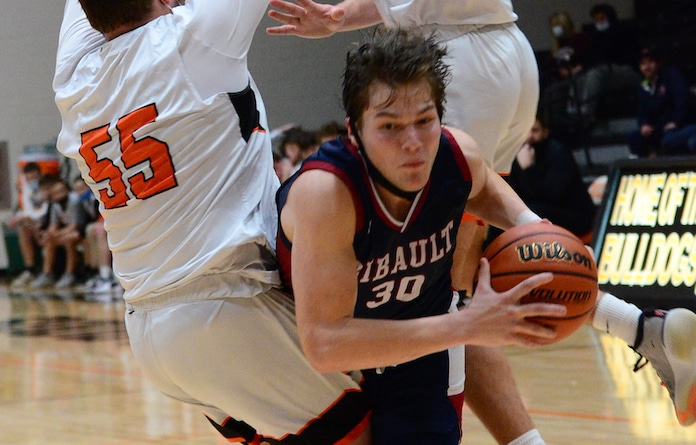 The season couldn’t have started better for the Gibault boys basketball team, which downed local rivals Waterloo and Valmeyer in the inaugural Waterloo-Gibault Thanksgiving Tournament.

The Bulldogs, feeding off an enthusiastic home crowd, jumped out to a 14-6 first quarter lead.

But Gibault settled in and went on a second quarter run to seize control of the game. The Hawks led 28-21 at halftime.

Neither team could hit from long distance, as Waterloo went 1-of-9 and Gibault went 2-of-9 from three-point range.

The Hawks did well defensively and made the most of their opportunities at the free-throw line.

Gibault went 16-of-22 from the charity stripe while Waterloo was 4-of-6.

The Hawks were led by Kaden Augustine with 14 points, followed by Kameron Hanvey with 13 points and Owen Scherff with 10 points.

Gibault followed Friday’s rivalry win with another one over Valmeyer on Saturday, 78-35.

Hanvey poured in 19 points and had four steals. Augustine added 16 points (including four three-pointers) and Jude Green came through with 11 points and 17 rebounds.

Valmeyer was led by Jordan McSchooler, who scored 13 points.

The Hawks continued tourney play with a 62-33 win against Litchfield on Tuesday to go 3-0. Augustine scored 17 points and Hanvey turned in 10 points, seven assists and eight steals. Gibault shot 54.8 percent from the floor – including 7-of-14 from beyond the arc.

Waterloo opened its tourney schedule with a 73-52 win over Litchfield last Tuesday.

Lenhardt, a senior, scored a career-high 36 points to lead the Bulldogs. He also had five rebounds and five assists and went 12-of-13 from the free-throw line.

Waterloo shot 59 percent from the floor in the win, which was the first for new head coach Allen Siedle.

Columbia is off to a 3-2 start this season following a successful showing at the Wesclin Tip-Off Classic.

On Saturday, the Eagles downed the host Warriors by the score of 51-37. Columbia outscored Wesclin 30-14 in the second half and shot 57.6 percent from the floor for the game.

On Friday, Columbia dropped a 58-40 contest to a tough Mascoutah squad. The Eagles led 14-8 after the first quarter, but it was all Indians after that.

Sam Donald, a 6-foot-6 freshman, led the Eagles with 12 points and six rebounds.

Last Wednesday, Columbia posted a 48-41 win over Nashville. The Eagles led 27-17 at halftime and held on from there.

The Eagles opened tourney play with a convincing 71-31 victory over Staunton last Tuesday.

Murphy poured in 27 points, including five three-pointers, and Donald scored 10 points in his varsity debut.

Columbia hosted Triad on Tuesday, falling 61-56. The Knights went on a 20-5 third quarter run after the Eagles went up 29-19 at halftime. Jack Steckler led Columbia with 17 points.

Prior to Saturday’s loss to Gibault, Valmeyer (0-3) dropped an 84-55 match to Litchfield on Friday. The Pirates committed 30 turnovers in the loss.

The Pirates opened tourney play with a 78-32 loss to Freeburg last Tuesday. Valmeyer was outrebounded 49-21 and shot just 20 percent from the floor.

The Tigers play next Wednesday at Grandview.