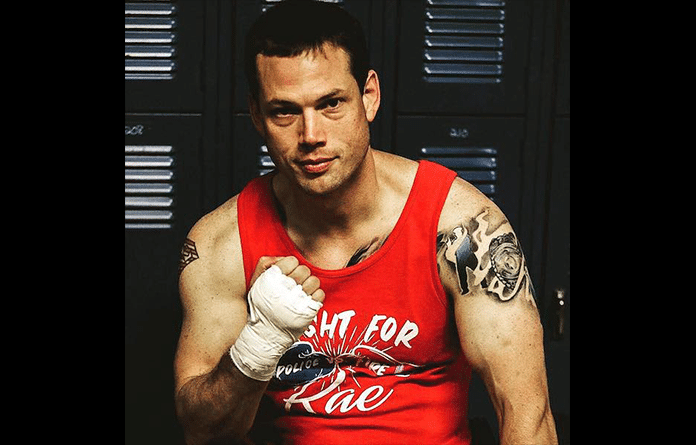 Nathan Biggs grew up in Waterloo and started wrestling in the third grade.

Now a police officer in Highland and with years of experience in mixed martial arts, boxing and other sports, he’s set to compete again in what he described as the largest first responder charity event in the St. Louis area.

Guns ‘N Hoses is an annual tournament that sees police officers and firefighters from around the area competing in a series of boxing and MMA bouts.

It will celebrate its 35th tournament next Wednesday night.

As a 501(c)(3) organization, proceeds from the event go toward Backstoppers, an organization which provides financial support to the families of first responders who have died in the line of duty.

The tournament started in 1987, and Guns ‘N Hoses Executive Director Steve Holley said it’s grown quite successful since then, with previous events being sold out at 17,000 seating capacity and a total of roughly $10 million being raised for Backstoppers over the years.

“They got a lot of help from local politicians, the local amateur boxing community and obviously the police departments and fire departments,” Holley said.

He described Guns ‘N Hoses as having “a great party atmosphere” and said this year’s event would feature a live performance by DJ Silver, a special message from Missouri Governor Mike Parson and an appearance by famed announcer Michael Buffer.

The event will also have a 50/50 drawing which has historically gone up to $50,000, along with other surprises Holley didn’t specify.

Given the event’s focus on first responders, there will also be special recognition of those who have died in the line of duty over the past year.

The main event consists of 12 bouts. All of them will be aired on FITE TV and the final six will air on FOX 2.

Holley said Guns ‘N Hoses places a special emphasis on safety. Athletes train at the organization’s facility, and they take special care to, as Holley said, not “match the Little Bo Peep with the Big Bad Wolf.”

Biggs, who has been going to Guns ‘N Hoses since he was 18, has also participated in the competition previously.

While he started wrestling very young, he also got into boxing thanks to a friend’s uncle who happened to be a pro boxer.

He later trained at a number of gyms during and after college, where he developed his interest in MMA – eventually getting to participate in the Guns ‘N Hoses charity event.

While he did face a rather severe injury, his passion for the sport drew him right back into it.

Biggs said his interest in the sport comes largely from the sheer entertainment value, coupled with the more cerebral elements of being in the ring.

“It’s like a human chess match. It’s always being one step ahead of your opponent, being able to read them, predict their next move and how do you counter that or how do you engage them properly to defeat them,” Biggs said.

Holley was similarly immersed in the world of boxing at a young age, with his father playing a major role in the St. Louis amateur boxing community.

He also expressed a deep passion for the sport, though, now overseeing Guns ‘N Hoses, he also wants to carry on what the men who came before him created.

“I grew up in amateur boxing and just basically want to carry on the tradition that Myrl, Jerry, Jack, my dad and all the rest of them started,” Holley said.

For both men, the role of Guns ‘N Hoses as a major first responder charity event is also a big factor.

Holley described his hopes for the event, saying “For me, it’s just giving back to the community and just never forgetting where I came from.”

Biggs spoke from the perspective of someone who has participated in the event as a first responder, describing the impact he’s seen Guns ‘N Hoses have on the families of fallen first responders in attendance.

“Hearing is only one thing, seeing is different,” Biggs said. “Whenever you fight in Guns ‘N Hoses, you get to actually meet a lot of the family members that are at the final 10 count at the very beginning of the event … All the families are there as well as some friends, so, I mean, talking to them and seeing how much it means to them is absolutely awesome.”

Tickets are $35 for reserved seats and $20 for general admission.