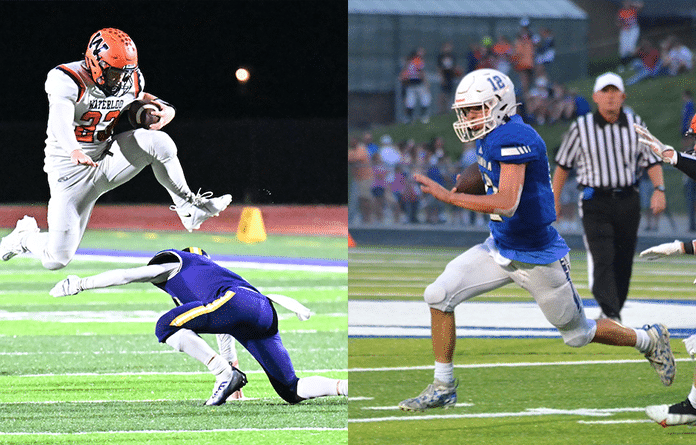 Three local football players earned state recognition for their accomplishments on the field this fall.

Davis was selected to the IHSA Class 4A All-State Team after leading the Bulldogs to a 7-4 record and the program’s first playoff win in 28 years.

Davis, a senior, rushed for 1,760 yards and 16 touchdowns this season to go along with 15 catches for 260 yards and two more scores.

He carried the ball 243 times this season for an average of 7.2 yards per carry.

Davis had two 300-yard rushing games this season – including a 317-yard showing in Waterloo’s first round playoff win at Richland County in Olney before exiting the contest early in the fourth quarter with the Bulldogs up big.

The first team all-state honor – only the fourth person to achieve that feat for the program – comes just days after Davis was named to the All-Mississippi Valley Conference First Team at running back.

Davis rushed for 946 yards and a junior and another 646 years as a sophomore during the COVID-shortened spring season.

Joining Davis on the IHSA Class 4A All-State First Team was Columbia High School senior Dominic Voegele, who led the Eagles on offense, defense and special teams this fall.

On special teams, he served as the field goal kicker, did the kickoffs and was the punter. He averaged 48 yards per kickoff and 35 yards per punt.

He also had a punt return touchdown this season and kicked a 47-yard field goal in a rainy win over rival Waterloo.

In addition to being named first team all-state, Voegele was selected First Team All-Cahokia Conference in the Mississippi Division.

Earning an honorable mention on the IHSA Class 4A All-State Team was Waterloo senior Bryce Reese.

Similar to Voegele, Reese was a force in multiple areas for the Bulldogs.

He was the team’s leading tackler on defense, recording 114 total tackles and two interceptions to receive First Team All-MVC recognition.

On offense, Reese had 50 carries for 485 yards rushing and five touchdowns this season – including a 69-yard touchdown run during Waterloo’s second round playoff loss to highly-ranked Springfield Sacred Heart-Griffin.