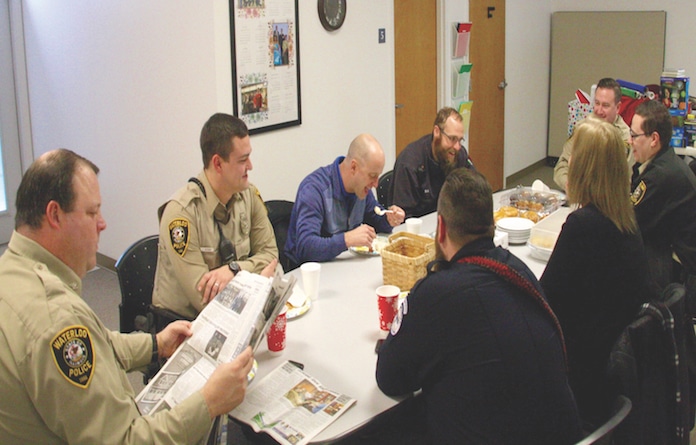 Since October, House of Neighborly Service has resumed a tradition that allows it to show appreciation for Monroe County’s first responders.

For two hours every Monday morning, the nonprofit offers a free breakfast to emergency services personnel, which it also did when its office was downtown.

“We just wanted to thank the first responders for what they do for the community and give them a safe space to come and enjoy breakfast and be able to have a safe space to talk,” HNS Executive Director Tina Charron said.

About 12-15 first responders stop by each week from Monroe County EMS, Columbia EMS and each police department in the county except Valmeyer’s.

“It gives us a chance to meet and network,” Waterloo Police Chief Jeff Prosise said.

“It is a great opportunity for our newer people to come and learn what Hose of Neighborly Services does for the community,” Monroe County EMS paramedic Nick Hoeffken added.

HNS offers a variety of homemade and store bought items to the first responders including casseroles, doughnuts and fruit trays, depending on the week.

Charron said anyone who would like to donate food can do so by dropping it off starting at around 8 a.m. Mondays at the nonprofit’s office, located at 1331 Jamie Lane in Waterloo.

“If anybody wants to donate anything for the breakfast, they’re welcome to,” she said.

Prosise said he and the other first responders appreciate the breakfast, which he said is in keeping with HNS’ mission.

“House of Neighborly Service helps so many people in the county, so when they contacted us and offered to help us, it was just great,” he said. “It’s just an extension of what they do for the community, and they’re just offering it to emergency services. It’s nice for us to have a chance to sit and get away.”