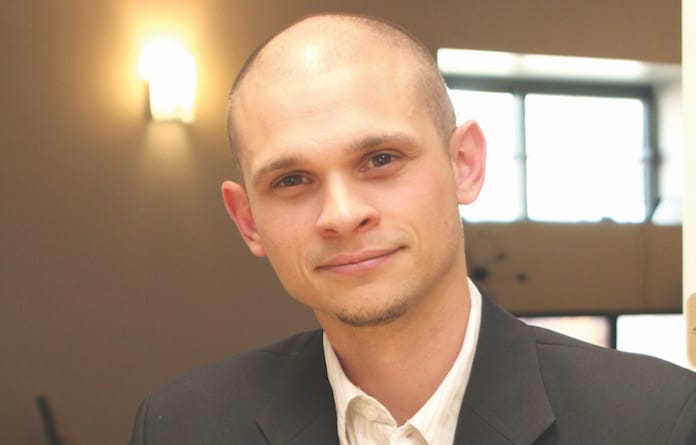 In order to get where he is today as president and owner of Inline Data Systems in Columbia, Justin Wilkerson had to overcome so much adversity people tell him it’s “one of those stories for Oprah.”

A Dupo native, Wilkerson’s mother left him and his three siblings when he was very young due to drug addiction.

Wilkerson moved between homes several times after that, learning along the way that his father was not his biological father.

When he was 16, he got in a rodeo accident that resulted in a broken neck and left him paralyzed from the elbows down for three months.

While he was in the hospital, the family members Wilkerson was staying with left him there, leaving him homeless.

Despite all that, Wilkerson said his difficult upbringing has driven him in business.

“It really made me resilient, for one,” Wilkerson, who still lives on IMBS Station Road, explained. “In business you’re always knocked down, and you have to keep going. Two, it really put people in my life who really cared about me. When a kid has nowhere to go and someone takes you in, you know that person really cares about you.”

The people who took Wilkerson in after he got out of the hospital were the family of one of his friends.

After staying with them for some time and regaining the ability to walk – though he still cannot run and has poor balance – Wilkerson enrolled at Ranken Technical College.

He graduated from that school in 2004, then went on to Webster University to obtain a degree in computer science. Before graduating from Webster in 2006, Wilkerson studied abroad in Thailand.

He also got his first job before graduation, working as an entry-level programmer at a company in downtown St. Louis.

Over the next few years, Wilkerson worked his way up to Chief Information Officer before that business closed. Next, he started working for a software company in Creve Coeur, Mo.

He did not stay there  long, as he realized he wanted to start his own business.

“I always felt like I had a knack, an ability to go into a business and understand their needs very quickly,” the 35-year-old said.

Wilkerson capitalized on that ability by founding Inline Data Systems in 2011 as a custom software development company that helped small businesses solve problems with software.

“So I’ve never felt like I was a stereotypical nerd, and I felt like I could really relate to a lot of business owners and, at the same time, I had this skill as a computer programmer to solve their needs.”

Wilkerson started in a basement before moving to an office in Swansea and two different locations in Columbia, eventually settling in the office his company currently occupies on the third floor of 11 South in Columbia.

The software Inline Data Systems creates varies greatly, as do its clients.

Wilkerson has worked for businesses as disparate as Build-A-Bear Workshop and funeral homes.

The software his company made for funeral homes allows them to ensure donors get credit for their donations and the families of the deceased know of those donations.

Inline Data Systems has also created a project for a package testing company that measures the results of tests the company does on containers of fertilizer.

But only about 25 percent of Wilkerson’s revenue comes from custom software, because he created another product a couple years ago that results in about 75 percent of the company’s earnings.

That is a customer relations management application Wilkerson said “took off” in the automotive industry. The product manages direct mail marketing for car dealerships.

“It’s really been kind of slow and steady,” Wilkerson said of his company’s growth. “I think the biggest milestone was getting over the fear of employees. Bringing on your first employee is a big ask. You’re asking someone to come and work for you at your one-man shop.”

Wilkerson, who now has five employees, said he plans to keep his momentum going, as his team is developing software similar to the one Wilkerson developed for automotive companies.