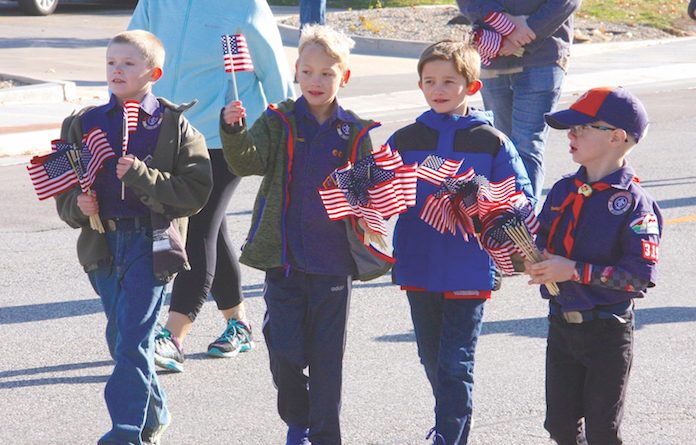 The feature is a military honor wall created by the Gibault Men’s Club to recognize alumni who have served in the armed forces.

The public will be able to see this wall firsthand Tuesday as Waterloo is hosts its annual Veterans Day ceremony in the Gibault gym at 6:30 p.m.

“I think every member of our club has a special place for the United States and veterans,” Gibault Men’s Club President Don Francescon said. “You look around the school and there are a lot of achievements and things like that, and we just thought it would be fitting to recognize these former students.”

The Gibault Men’s Club  promotes the welfare of the school through volunteer efforts, fundraising and more.

Keith Sanders, one of the club’s members, thought of the idea for the wall because he has a son in the military.

The club and school agreed it was a worthwhile effort, so they began creating the wall, which includes the names of students, what class they were a member of and in which branch they served.

The display also includes a donated statue of a soldier, military cross and is wired for video.

Sanders did much of the carpentry work on the wall, while Steve Wilke designed it and also helped with construction.

“It was something we wanted to do first class,” Francescon noted. “We wanted it to look very good.”

Francescon said that latter part was the most difficult part of the work, taking up many hours as the club has worked on the wall for more than a year.

The club was helped in those efforts by Gibault Director of Development Andrea Biske, Waterloo Mayor Tom Smith and students who submitted names.

“We wanted to make sure we did this right and made it all-inclusive,” Francescon said.

In addition to club members’ donation their time to construct the wall, several local merchants donated or discounted materials for the project.

Francescon said all that assistance is telling.

“It’s nice to know that many people in the community valued this wall as much as we did and valued the men and women who served in the armed forces and came from Gibault,” he said. “We’re very proud of them.”

Gibault Principal Steve Kidd said the wall, which currently has over 230 names on it, also serves an important function for current students.

“Our honor wall is a perfect reminder to all who pass by it that heroes exist all around us,” he explained. “We are free because good men and women have served and continue to serve our country in the armed forces.”

“We are trying to teach that lesson to our students while they are here at Gibault,” Kidd continued. “We require service hours of every student each year. What a wonderful reminder for them to see every day, of people who truly understood the gift of service.”

Kidd said the school has already received requests to add more names to the wall, which the club left room and extra hardware for.

Contact Gibault at 939-3883 or by going to gibaulthawks.com/contact with the alumni’s name and graduation year to get a veteran added.

In addition to Tuesday’s program at Gibault, other events are planned as part of Veterans Day.

Waterloo will conduct its traditional laying of the wreath ceremony 11 a.m. Monday at the Veterans Memorial in Lakeview Park.

Later that night, the Waterloo VFW will honor 10 Vietnam veterans in the basement of its building at 6:30 p.m.

In Columbia, a Veterans Day service at the American Legion Post 581 will take place 11 a.m. Monday.

Also being recognized at the program will be the late Arthur C. Juengling, a sergeant with the Army Air Service who died in a Texas plane crash in 1922. His funeral, with over 10,000 attendees, is believed to have been the largest ever in Monroe County. Juengling was part of several early aviation records.

All local emergency responders are encouraged to attend this program.