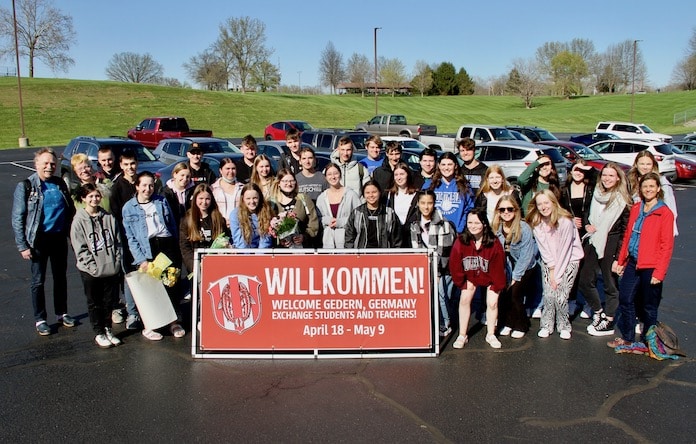 Anna Kremer, one of the students visiting from Gedern, said she is particularly excited about the visit.

“(I’m looking forward to) the experience and seeing how they live here, what it’s like to live in the States,” Kremer said.

Nickerson said the few differences between the American and German teenager lifestyles are usually what the exchange students look forward to experiencing the most.

“There are probably a lot more similarities than differences, but there are things that the German schools don’t do,” he said. “For example, there aren’t any school sports in German schools. If Germans want to play sports, they typically play for a local club team. When they come they get to go to prom as long as it falls within the three weeks they’re here, and this time it does. That’s something they really look forward to … because they don’t typically do school dances and things like that.”

Also on the students’ itinerary is a “Monroe County Day” where the Germans will tour the courthouse, Rock City and other county landmarks, and a trip to the Gateway Arch, Missouri History Museum, a St. Louis Cardinals game and more.

“We try to make it a mix of educational and a little bit of fun, sightseeing stuff,” Nickerson said.

The exchanges not only provide the German students with a first-hand look at American culture – the people of Columbia also see a window into life in its sister city too.

“This is all done in English, so it gives them an opportunity to practice the language,” Soraghan said, explaining presentation topics hone in on specific aspects of German culture such as sports and school.

Linus Schlaucher, one of the students from Germany, is giving his presentation on the soccer club he is part of back home.

“It’s interesting and I know much about it,” he told the Republic-Times.

Adding to Soraghan’s excitement is the fact this is the first Sister Cities exchange since the COVID pandemic.

“The students were disappointed when it was canceled, but once pandemic restrictions were rescinded and people were comfortable housing students … the plans moved forward,” Soraghan said.

In September, a group of adults from Gedern will be visiting Columbia.