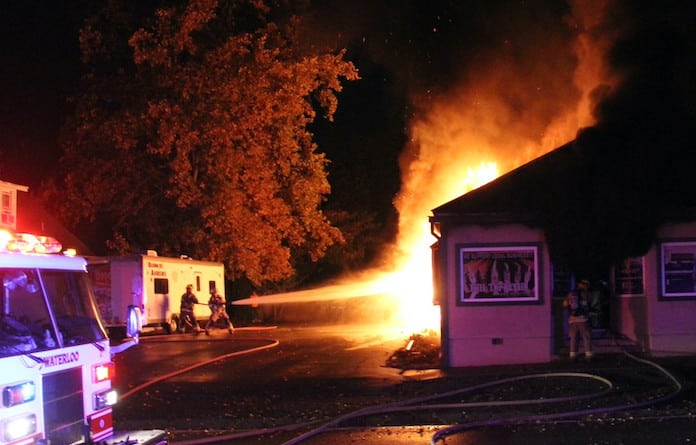 A building that serves as home to three Waterloo businesses was damaged by fire early Tuesday morning after flames from a burning nearby motor home spread to the structure.

The Waterloo Fire Department responded about 2 a.m. to the motor home fire next to 411 Park Street. The fire quickly spread to the structure, causing extensive damage.

After initially clearing the scene at about 5 a.m., firefighters returned to that location at about 7:30 a.m. to extinguish hotspots.

The Columbia Fire Department provided mutual aid at the scene.

Businesses that operate from that building include Full Throttle Screen Printing, Adorable Beast and Simplicity Software. No injuries were reported in the blaze.

“Don’t quite have the words right now,” Full Throttle owner Patrick Ahrens posted on Facebook following the fire. “This business has been my life for the past 12 years. I built it from a single heat press and vinyl cutter to a full-fledged printing company. I’m feeling a bit numb at the moment.”

The motor home that caught fire was owned by Ahrens. His father-in-law, Randy Rehmer, said the two had been working on the RV recently and had just gotten it running again.

Adorable Beast, which is a pet grooming business owned by Kelsie Felix and Justine Hennrich, posted on Facebook that no animals were inside at the time of the fire.

“We will be closed until further notice,” Adorable Beast posted. “Please give us time to navigate this difficult situation.”

The fire from the RV spread into the soffet area of the business complex, Shive said, soon advancing into the attic.

Full Throttle sustained the most damage of the three businesses, Shive said, but all of them were impacted.

Ahrens said he wasn’t sure what the future holds for his business, other than it will continue in some form.

“Not sure what’s next, but this isn’t the end,” he posted on Facebook. “We’ll be back!”

Tuesday’s fire marked the second in as many months impacting Waterloo businesses.

Just one month to the day of this fire on Park Street, Ahne’s Bakery at 201 W. Mill Street sustained significant damage during an evening blaze.

That fire appeared to be electrical in nature, fire officials said, and bakery owner Jeff Ahne said he plans on “getting it cleaned up and fixed” – though it may take several months for that business to reopen.