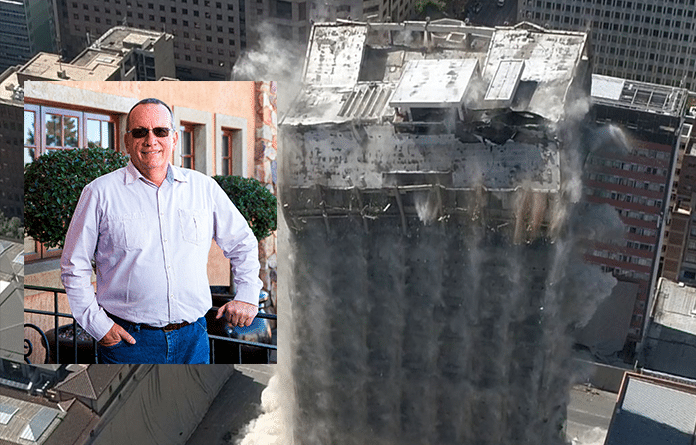 As a child growing up on a farm just outside of Waterloo playing with smoke bombs and rockets, Joe Brinkmann never saw himself building a demolitions company.

Decades later, with several patents and numerous explosive and mechanical jobs under his belt, he and his wife have built an award-winning business providing demolition services to much of the developing world.

Brinkmann said he was born in Red Bud and raised in Waterloo, where he attended Ss. Peter & Paul School and Gibault Catholic High School.

Brinkmann said he inherited his father’s nature as a hands-on kind of person – his father being a farmer and millwright.

That mechanical interest coupled with his childhood enjoyment of explosives established the beginnings of what would eventually be a successful career.

The couple then began their life after college by taking a unique turn.

“Immediately after university, my wife and I went to South Africa to gain some experience because it was one of the pre-eminent mining jurisdictions in the world, so we thought we’d come here for two or three years and get some experience and move on,” Brinkmann said. “At that stage we were still finding a life, eventually, back in the U.S. in academia.”

That relatively brief stay in South Africa in January 1983 would eventually turn out to be far more permanent than expected.

Brinkmann said the two continued their education, with Liz earning her master’s degree and both of them doing some work toward a PhD.

They then began doing contract work in 1991, with their first big job in 1993. This company then grew into today’s Jet Demolition, so named for the jetting action of a shaped explosive charge.

“It has expanded over time, and our specialty is heavy industrial demolition and difficult projects, either mechanically or explosively,” Brinkmann said. “So we go after difficult demolition projects.”

Along with their emphasis on particularly challenging projects, Brinkmann said Jet Demolition focuses its services on providing first world demolition where it’s needed in the third world, as the developed world’s demolition needs are already met by the bulk of the industry.

Jet Demolition’s work has earned the company a number of awards from the annual World Demolition Summit. As Brinkmann put it, “We’ve been winning since we started participating in 2016.”

In 2020, Jet Demolition undertook the controlled implosion of the Bank of Lisbon in Johannesburg, South Africa, which involved the use of 920 kilograms of explosive in 2,363 holes in a building 7.8 meters away from a neighboring structure.

For this project, the company was awarded both the Explosive Demolition Award and the World Demolition “Best of the Best” Award.

Brinkmann attributes the company’s success to work ethic and dedication to taking on some of the more difficult demolition projects out there.

“We all are addicted to our work,” Brinkmann said. “We take lots of pride and joy in our work, and it leads to, you know, we focus on excellence, getting projects that most people run away from and we go for it and make a success out of it.”

While the company had a number of motivating milestones early on like receiving the patent for several shaped explosive charges, the development was not without its stressful moments.

Brinkmann said starting a company without any capital was a major hurdle, and starting in a foreign country halfway around the world was intimidating, but he and Liz knew they could always work something out.

“It was absolutely terrifying,” Brinkmann said. “However, having a large family in the USA, we knew that we had a backstop in case we had to start again. We knew we could go back to the USA if all else failed, live in someone’s basement, and start over.”

Brinkmann spoke positively about his experiences with Jet Demolition. He described the stark difference in surroundings between working across 15 countries and three continents to his origins in Waterloo, which was a significantly smaller community as he was growing up.

“Ending up in demolition, I found the ideal job by accident, right?” Brinkmann said. “I didn’t have intentions to be here as I was developing my career. It just kind of happened. I was a farm boy, grew up on a farm a couple miles outside of town, and Waterloo, in those days, didn’t have a stoplight.”

Brinkmann says his work with Jet Demolition has him focusing on technical aspects of the business like designing controlled mechanical and explosive demolition methods.

Brinkmann expressed satisfaction with the direction life ended up taking him, as he and Liz have raised four boys and built what he described as “the largest and most technically advanced demolition company in Africa.”

“I just can’t believe our good fortune to end up where we are,” Brinkmann said. “Africa is an interesting place, lots of challenges, but it has been very rewarding, and we’ve just been very lucky.”