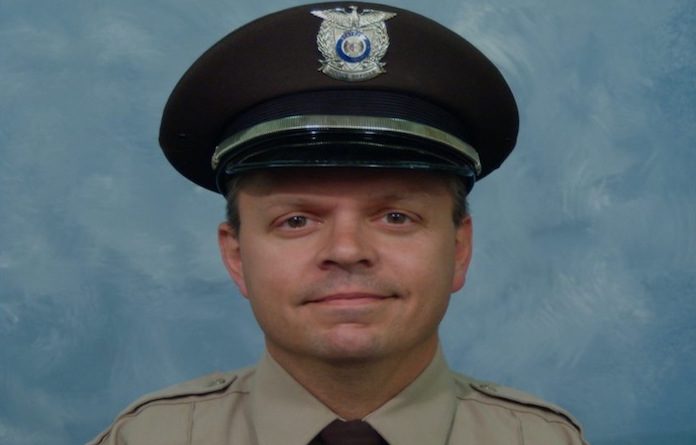 After he got out, Ellis earned a master’s and started working as a civilian.

After the Sept. 11 terrorist attacks, however, he felt the call to serve his country again and enlisted in the U.S. Marine Corps Reserve from 2001-2005, getting deployed to Iraq as a squad leader in November 2004.

In January 2011, he answered the call to serve again when he joined the St. Louis County Police Department.

Ellis, 49, died Friday morning from injuries sustained on a crash in the 6100 State Route 159 north of Hecker Thursday around 11 p.m.

“(Ellis) was a valued member of the police department,” Belmar told reporters at a press conference Friday. “And, I guess more than anything else, I would want you to know that his life was emblematic of service.”

Claybrone Jr. attempted to pass the semi, which was being driven by 50-year-old Jude A. Greco of Caseyville, when it struck the southbound 2009 Dodge Caravan driven by Ellis head-on.

The Hyundai spun back into the northbound lanes and was struck by the semi.

Ellis was transported to Barnes Hospital in St. Louis, where he died.

A passenger in the Hyundai  – Ariah Claybrone, 24, of Memphis, Tenn. – also died from injuries sustained in the crash. Dale Claybrone was hospitalized with serious injuries.

According to a Facebook post from Need of Aid, the nonprofit arm of the St. Louis County Police Association Missouri Fraternal Order of Police Lodge 111, Ellis was on his way back home to Hecker after a shift when he died.

In addition to his department family, Ellis is survived by his wife and five children ages 9-17, along with other friends and family.

The Ellis family was involved with the Monroe Actors Stage Company, particularly James’ children Ethan and Courtney. Their cousin, Ben Kohler, and Ben’s mother, Michelle Kohler, were also involved with the group.

Ethan is set to be the lighting operator in the upcoming production of “It’s A Wonderful Life,” while Ben will play a young George Bailey and Ben Davis in that play.

“We are heartbroken for this family,” MASC posted on Facebook. “Ethan and Courtney are part of our theater family, also Michelle Kohler and Ben Kohler, and we express our deepest sympathy at this time of tremendous loss.”

At work, Ellis was a decorated officer.

He earned a Lifesaving Award for performing CPR on an unresponsive male in August 2012. In 2015, he was named the Central County Precinct Officer of the Fourth Quarter.

“Officer Ellis will always be remembered by those that were fortunate enough to know him as a humble public servant who performed his duties with distinction and honor throughout his life,” Need of Aid posted on Facebook.

Need of Aid also shared a link to a GoFundMe to raise money for Ellis. As of Tuesday, it had raised over $6,600.

“Officer Ellis was a true servant,” Missouri FOP Lodge 111 posted on Facebook when promoting the fundraiser. “He served his country as a marine, his community as an officer and, most importantly, his family. He was the sole provider for his family, and they will need assistance to get through this.”

The BackStoppers also announced Monday that it would be assisting the Ellis family, which includes an immediate $10,000 check and ongoing assistance.