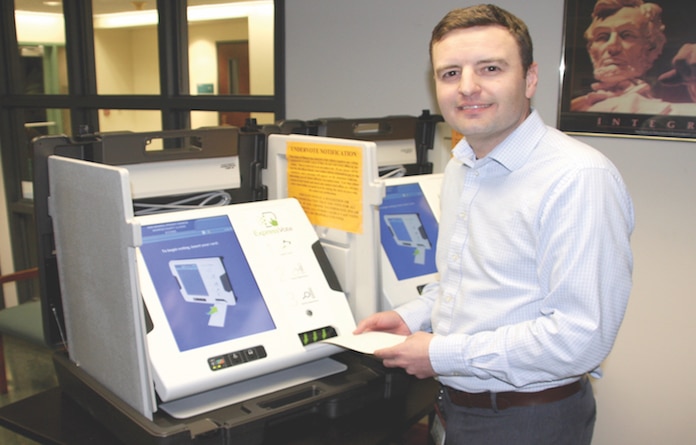 Early voting for the Nov. 3 general election began Thursday in the office of Monroe County Clerk Jonathan McLean at the Monroe County Courthouse in Waterloo.

There is also a proposed constitutional amendment on the ballot that would change Illinois’ income tax structure from flat to graduated. Read more on that by clicking here.

A resident who voted Thursday morning expressed concern that on the screen for the amendment portion of the ballot, there is a button that says “MORE” and another that says “NEXT.”

“The language for the amendment is verbatim from the state,” McLean explained, adding that “it could be confusing for some voters.”

McLean said that since the legal wording for the amendment is lengthy, it does not fit on one screen.

“The nice thing about our new equipment, the voter gets a second opportunity to look at their printed ballot prior to casting the ballot,” McLean stressed. “If they overlooked it, we can spoil their ballot and let them vote again.”

McLean also said his office has decided to inform early voters to click the “MORE” button on the constitutional amendment when they are handed the ballot.

“I think this is the best way to bring more attention to the matter,” he said.

Voters can confirm their registration status and polling place location. Voters who have chosen to vote by mail can confirm that the clerk’s office has received their application. Beginning on Saturday, voters can use the lookup to see when their ballot was mailed. Additionally, when their completed ballot has been received in the clerk’s office for counting, the system will update to show that the ballot was received and processed.

“It is my feeling that many voters are confused and suspicious of everything happening this election cycle,” McLean said. “I hope this service will bring more transparency to the voting process and reduce the number of phone calls and email we have been receiving in our office from concerned voters.”