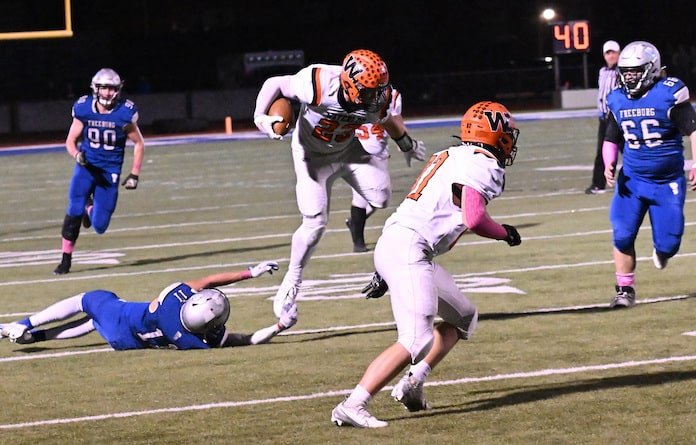 The Waterloo High School football team rushed for 515 yards in a 45-14 win at Freeburg on Friday to guarantee a spot in the postseason.

The Bulldogs (6-3) became playoff eligible a few weeks ago, but a sixth win assured them a playoff game.

The IHSA playoff pairings were announced Saturday night and Waterloo was listed as a 10 seed in Class 4A. The Bulldogs will face seventh seeded Richland County (7-2) to open the postseason this Saturday at 2 p.m. in Olney.

Senior running back Evan Davis feasted on the Freeburg defense behind a strong Bulldogs offensive line, carrying the ball 25 times for 256 yards and three touchdowns.

Waterloo led 10-0 at Freeburg after the first quarter thanks to a Davis TD run and a 23-yard field goal by Lexi Stephens. The Bulldogs increased their lead to 31-14 at halftime. Osterhage closed out the first half with a 42-yard TD run.

The defense was solid as well for the Bulldogs, recording six sacks and three interceptions. Jason Hooser had three sacks to lead Waterloo.

Davis now has 1,262 yards rushing this season, which makes him Waterloo’s all-time single season rushing king. The previous record was set by Brett Gross, who had 1,176 yards.

For his WHS career, Davis has rushed for 2,854 yards on 496 carries with 33 TDs. He will look to add to that total this week at Richland County.

Osterhage has 760 yards rushing and 175 yards receiving this season with 10 total TDs.

On defense, Osterhage has 10 sacks and an interception.

Special teams could be an X-factor in Saturday’s playoff game, as Waterloo has blocked several punts this season to either score or give its offense a short field.

Waterloo has now made the playoffs 11 times in the 22 possible years since 2000, going 0-10 in those prior contests.

The last playoff win for the Bulldogs came back in 1994, which was one year after the program’s Class 3A state runner-up finish and the final season for legendary head coach Brent McGee.