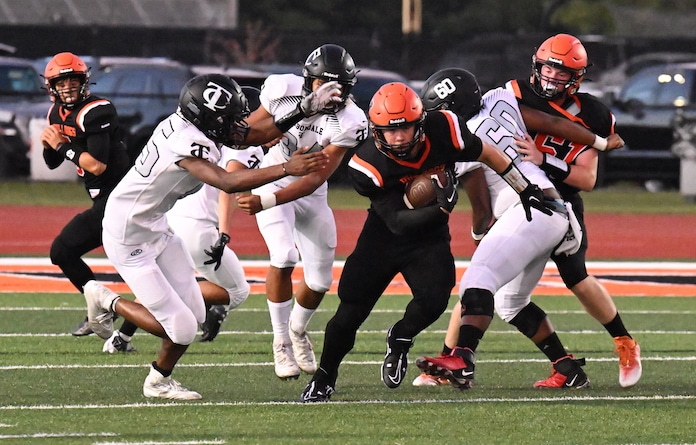 The Waterloo High School football team bounced back strong from the prior week’s loss at rival Columbia to win 35-14 in their home opener over Carbondale on Friday.

Leading the charge was senior running back Evan Davis, who rushed for a whopping 300 yards and scored two touchdowns.

“He’s capable of games like that,” Waterloo head football coach Dan Rose said. “Our guys just put themselves in good position for him to do it.”

His 16-yard TD run put the Bulldogs up 7-0 with just more than seven minutes left in the first quarter.

Fellow WHS running back Koby Osterhage also got into the act, scoring on a 34-yard run early in the second quarter to put the ‘Dogs up 14-0.

Waterloo senior quarterback Aidan Morrow added a short TD run late in the first half, and the ‘Dogs went into halftime up 21-7.

Davis came through again at 9:13 of the third quarter, this time running it in from 25 yards out.

Rose said his team – especially the offensive line – learned from some issues noticed during the first couple of weeks and worked on them hard in practice.

“Our offensive line has greatly improved since week one,” Rose said. “Our backs ran the ball hard as well.”

On defense, Waterloo got two quarterback sacks each from Osterhage and Jason Hooser. Maxwell Mitchell also recorded a sack.

Reese again led the ‘Dogs in tackles with four to go along with three assists.

The Bulldogs (2-1) will have a tough task this Friday, hosting Mississippi Valley Conference foe Mascoutah (3-0).

Rose said Mascoutah is much like Carbondale in that both teams are fast and athletic.

“Mascoutah is much more disciplined than Carbondale,” Rose said. “We’ll have to come up with a way on defense to limit their speed.”

Following a 2-0 forfeit victory Friday over Marquette due to that school not having enough healthy players to compete, the Eagles will host Roxana this Friday night.

Roxana enters the game with a 2-1 record after blanking Civic Memorial on Friday, 42-0.