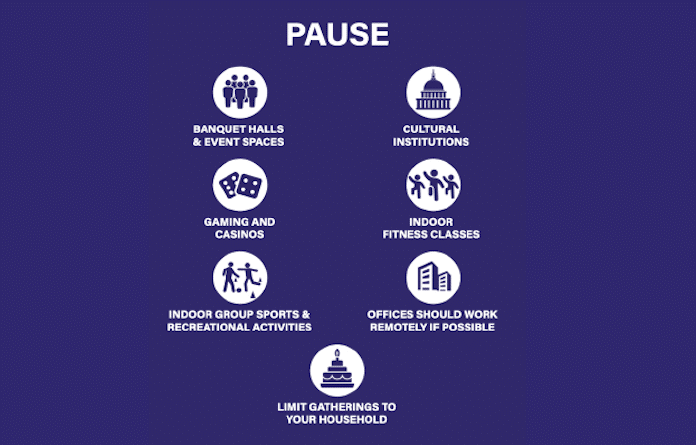 Monroe County recorded its second-highest ever daily number of cases Monday as the pandemic continues to run rampant in the area.

The county has had 1,879 total coronavirus cases since the pandemic began, with 445 of them active.

There were 73 new cases reported Monday, 43 cases Sunday, 38 cases Saturday, 31 cases Friday, 25 cases Thursday and 42 cases Wednesday. In other words, there have been 252 new cases here in six days.

“It’s widespread and it’s not going to change anytime in the near future,” Monroe County Health Department Administrator John Wagner said of the virus’ spread in the community. “Monroe County is currently seeing an increase in numbers over all age demographics, and people need to use appropriate measures to reduce the trend.”

The 73 cases are likely a result of how the state reports its testing numbers, but Wagner was not yet sure of that.

The state also announced a new death in Monroe County on Friday. The deceased is a woman in her 80s.

There are 18 local residents hospitalized with the virus as of Monday.

Wagner said that rise in hospitalizations is due to the increase in cases, as he noted the county is seeing as many as six times average number of daily cases as it had in recent months.

Wagner said most hospitalizations are still coming from long-term care facilities, though some are younger people who are typically hospitalized for only a few days.

He also said there are multiple residents who have been hospitalized with COVID-19 for over a month.

As the third wave of the coronavirus pandemic is pummeling the Midwest, Illinois saw new, stricter mitigation measures take effect statewide on Friday.

This comes as Monroe County is seeing an unprecedented rise in cases and hospitalizations, along with more deaths.

Gov. JB Pritzker and the Illinois Department of Public Health announced Tuesday that the entire state will be under new mitigations beginning 12:01 a.m. Friday. The goal of the new measures is to suppress the spread of the novel coronavirus, which is spreading exponentially throughout the state, and prevent hospitals from becoming overwhelmed.

“The simple fact is that COVID-19 is spreading so quickly and so widely, and our hospitals are beginning to experience real strain and at the current infection rate they will be overwhelmed. So whenever possible, we need you to stay home,” Pritzker said.

Under the Tier 3 mitigations, bars and restaurants should continue with no indoor dining, closing at 11 p.m., using social distancing for patrons outdoors and following other current guidelines.

The new mitigations recommend that health and fitness centers should operate at no more than 25 percent capacity with no indoor group classes. Indoor recreation facilities like movie theaters, bowling alleys, performing arts centers, gaming businesses and casinos should close.

Indoor social gatherings should be limited to household members, and facilities that normally host such events should not. All employees should work from home if possible.

All indoor group sports and recreational activities, including youth sports, should pause. Personal care service businesses like salons should operate at 25 customers or 25 percent capacity or less.

The latest round of restrictions does not include a stay at home order, but the state said it may issue another one of those if the situation does not improve in the coming weeks.

As more restrictions are imposed, Wagner has recommended the county schools return to in-person learning, in large part because of the spread of the virus.

The Waterloo School District has announced plans to do so, and Columbia followed suit following a Wednesday night special board meeting. The Valmeyer School District and Gibault Catholic High School also said that they would use remote learning only the week after Thanksgiving.

“It’s time to take a little break and see if we can get the numbers back down or at least stabilize,” Wagner said. “Right now, our main concern is they’re going to go up. If they continue to do that, we have a big problem.”

Other government facilities are also closing, as the city halls in Columbia and Waterloo and driver services facilities throughout Illinois announced last week that they would temporarily close.

The Southwestern Illinois Council of Mayors, of which Waterloo Mayor Tom Smith is a member, penned a letter to residents Tuesday urging them to take proper precautions like wearing a mask to slow the spread of the virus.

“Each of us is called upon to lead by example, to share responsibility, and to show concern for the well-being of our fellow humans,” Council President and Fairview Heights Mayor Mark Kupsky wrote. “Practicing social distancing and exercising other precautions are the only way to limit the spread of this virus. Our hospitals are already overwhelmed. Our businesses need to reopen and operate fully in order to support the many families that rely on them for their livelihood.”

Wagner said the two biggest changes since the rise in cases began are that school has resumed and people have been gathering indoors more.

He said it does not appear schools are centers of transmission for the virus.

The IDPH now has Monroe County’s death toll from the coronavirus at 43. In fact, Monroe County has the highest case fatality rate of all counties in the St. Louis metro area at 2.4 percent.

In St. Clair County, there have been 13,340 total positive tests and 245 coronavirus-related deaths. A total of 146,963 tests have been performed there.

Randolph County has had 2,007 confirmed cases, 251 of which are active. Twenty-six people have died from the virus in that county. A total of 20,615 tests have been performed there.

The metro east region, including these counties and Monroe County, has seen its test positivity rate rise to record levels in recent days.

The seven-day rolling average positivity rate was 14.3 percent on Nov. 20. It has been over the threshold for new mitigations of 8 percent for more than a month.

Illinois overall is up to 664,620 cases of coronavirus and 11,552 deaths after reporting its highest single-day cases and deaths ever or in months, respectively.

The St. Louis Metropolitan Pandemic Task Force, which is made up of physicians and healthcare professionals from the area’s largest healthcare systems, said this week that staffed hospital beds in the St. Louis metro area – which includes the metro east – are very near to max capacity.

“For months, we’ve talked about a time. A time when we would run out of options. A time when we would run out of space to care for sick patients. When our options would be limited. When the virus is hitting us so hard that the healthcare system we have would be unable to address the peoples’ needs. That terrible time gets closer with each passing minute,” Dr.  Alex Garza of the Pandemic Task Force said. “The real peak of this pandemic has yet to come… the best time to act was really yesterday, but a good time to act is now.”

Nationally, more than 12.4 million people have contracted the virus, while at least 257,117 people have died.

Worldwide, there are over 59 million cases of coronavirus and over 1.3 million COVID-19-related deaths