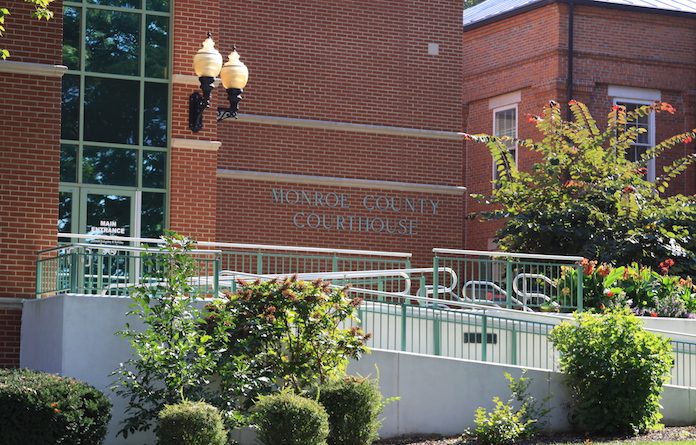 The Monroe County Board on Monday listened to concerns from rural Columbia residents in regard to a proposed new AT&T cell tower.

Monroe County Director of Mapping and Platting Mike Fausz brought the request by AT&T before the board. The tower is proposed at 1332 Valmeyer Road on property owned by Advantage Self-Storage.

The tower proposed is a 155-foot-tall monopole structure.

Several local citizens spoke out against the plan, stating this tower would have a flashing red light on top and would be a visual eyesore that would reduce their property values and make their homes less attractive to live in.

One person also expressed concerns about radiation that would emanate from the tower and its impact, especially on young people.

After considerable discussion – including asking area citizens attending the meeting if they currently have good cell phone service – commissioners Vicki Koerber and Bob Elmore moved to table the request for further consideration.

They invited citizens to engage neighbors in the discussion and advised AT&T to consider alternative locations farther from area homes.

Commissioner Ron Schultheis, who is dealing with a medical issue, was not present at the meeting.

A citizen’s prior request to reduce speed limits on a stretch of KK Road resulted in the commissioners directing Metzger to draft a formal resolution for a policy establishing and posting speed limits on county and road district roads.

Metzger brought the proposed resolution to the board Monday, stating that Monroe County will follow current Illinois Department of Transportation policy for establishing limits and posting them for motorists.

The county has done so in the past, but this formalizes the policy for Monroe County.  The resolution was passed.

The specific issue that brought this matter to the commissioners’ attention was a request to reduce speeds on an approximately half-mile stretch of KK Road in Road District 7 between Bushy Prairie Road and Kaskaskia Road.  An engineering and traffic study concluded that the speed limit should be established and posted at 40 miles per hour there.

Metzger noted the study demonstrated that most drivers passed through that stretch at 41 miles per hour, and thus would not be making a great change to proceed at the new limit.

The commissioners next approved an agreement with Waterloo to enhance pedestrian safety on the walking path along Country Club Lane and HH Road.  A new sidewalk was recently completed on Country Club Lane.  The agreement formalizes the joint project named the North Waterloo Trail Connector Project, and includes plans to install pedestrian crossing signals where the trail crosses Route 3.

Metzger also reported that work is nearing completion on the Levee Road Bridge where it crosses Carr Creek west of Columbia.  Work has been delayed due to continuing high water in the area, but he said only minor work, including bridge railings, remains and he hopes the bridge would be open in coming days.

He was authorized to make a final payment of $61,593.12 on completion of the work, with the money coming from the township bridge fund.

The county engineer’s salary is paid by the Motor Fuel Tax that comes from state funds.  While the final salary figure has not been determined by the state, it is based on comparable state employee salaries, and the county authorized $110,000 to be appropriated from this year’s MFT to be in place in the new fiscal year that begins Dec. 1.

Monroe County Emergency Management Agency leaders Ryan Weber and Kevin Scheibe came to the board to get approval for a new Monroe County Multi-Hazard Plan, which updates a plan from 2011.

In addition to planning to counter floods, the plan lays out responses to other weather threats and terrorism issues such as active shooters. The document envisions ways to counter these multiple threats for the next five years and is slated to be reviewed annually during that period.

The plan was endorsed by the commissioners.

Three reappointments were approved: Carla Heise, Monroe County Ambulance Director, to the 9-1-1 Emergency Telephone System Board; Vicki Koerber to the Southwestern Illinois Law Enforcement Commission; and Mark Altadonna to the Monroe County Assessment Board of Review.