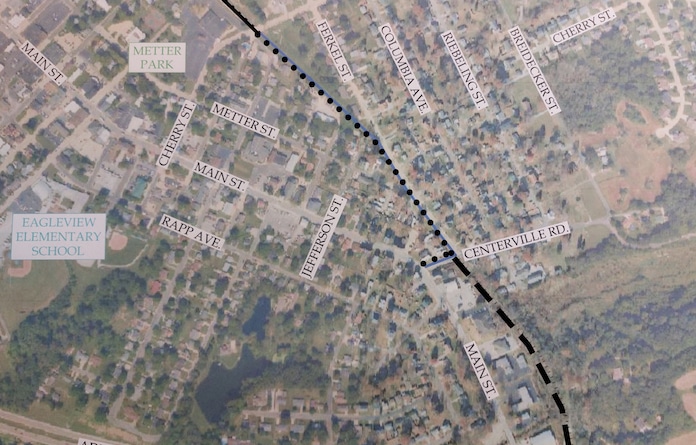 Schenk gave visitors an overview of the project,  explaining the purpose of the public meeting was to gain community input in order to “understand what we can do to make it better.”

The path will extend the existing 1.7-mile asphalt walking and bike trail to Centerville Road.

The 10-foot-wide extension will continue the trail from Cherry Street along the city-owned right-of-way of the former train track used by the GM&O railroad company south between Metter and Ferkel streets, then run alongside Ferkel Street from just past Jefferson Street to Centerville Road.

The path will add around 2,000 feet, or just under a half mile, to the GM&O Heritage Trail.

Thursday’s meeting featured maps of the planned extension as well as schematics that describe construction and drainage features, proposed stop signs along the path extension and other ways to give “high visibility” to pedestrians and cyclists using the trail – especially at the Cherry Street crossing.

From Centerville Road, the trail will connect to Main Street via an eight-foot-wide path, which Schenk described as the “logical termini” for the upcoming phase.

A plan for a third phase would extend the trail past Ferkel Street behind businesses and houses on South Main Street to Route 3, although the next extension will not be considered until work is completed on the second phase.

The latest phase connector project is federally funded through the Illinois Department of Transportation.

In 2021, IDOT approved $276,430 in federal funds to be used as part of the state’s transportation alternatives program.

Total cost of the project at the time was expected to be just under $400,000. Smith said retaining walls in the original proposal will not be needed, but he was hesitant to say the overall price will be lower due to “volatile” material and construction costs.

Smith said public comments were almost all positive, with most questions involving the next extension from Centerville to Route 3.

Smith said no major changes to the upcoming project will be needed based on public input.

The next step is to send public comments and plans to IDOT for preliminary plan approval.

Smith said he expects this project to begin around the spring of 2023 and be completed in a six-month window from the start date.