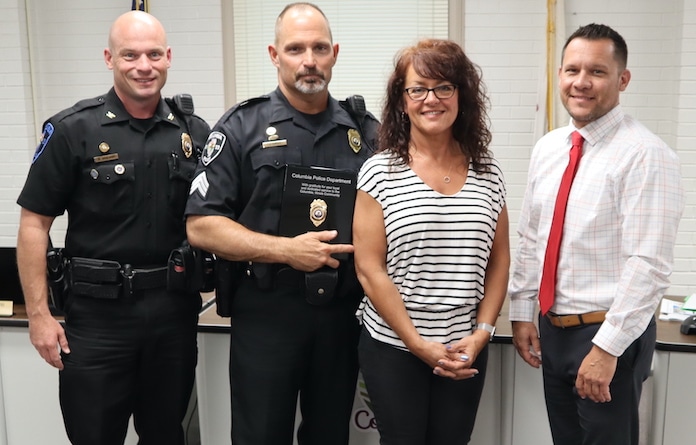 Simon gave his final 10-42 sign-off Monday afternoon and was officially recognized at the Columbia City Council meeting later that evening.

Columbia Police Chief Jason Donjon said a few parting words for Simon at the council meeting, congratulating him for his time at the department serving as, among other things, patrolman, sergeant, and founding member of the ILEAS Region 8 SRT team.

“As well as being a part of the training for many of those who walked through the Columbia Police Department doors, he’s also been a mentor and a friend,” Donjon said. “Enjoy your retirement, Sergeant John Simon.”

Simon also said a few words at the meeting, most notably urging the council to keep the budget for police training strong.

“From early on, training has always been a very important thing that the police department always took the time to create a fund and allow officers to go to,” Simon said. “I think that is a big reason why Columbia has the reputation it has developed over the years in being a solid department and one you don’t see in the news for the negative things.”

Simon also thanked past Columbia Police Chief Gene Henckler for giving him the opportunity to start at the department back in 1995.

“I’ve enjoyed my time here,” Simon said. “It’s a great city to work for, and it’s a great department to represent.”