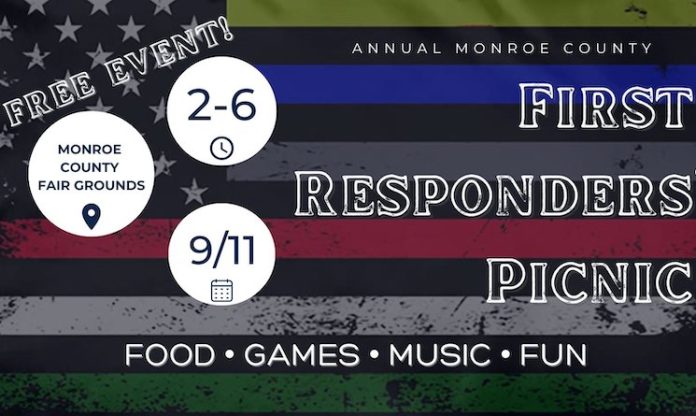 A First Responders Picnic hosted by several churches in Monroe County is set to take place this coming Sunday at the Monroe County Fairgrounds.

The picnic will feature free food, including hamburgers and hotdogs, from 2-6 p.m., a cornhole tournament at 3 p.m., first responders tug-of-war at 4:30 p.m. and a number of other attractions including laser tag and a rock wall.

The picnic was originally planned through Second Chance Ministries. Lura Butler, who has played a major role in organizing the event, said it began as just another picnic for the church until the planning committee noticed that 9/11 fell on a Sunday this year.

That convenient date prompted the committee to put an emphasis on celebrating first responders on the anniversary of the Sept. 11, 2001 terrorist attacks. Butler said the hope is to give officers, EMTs, firefighters and all first responders a chance to unwind.

“We wanted to offer them a day where they could get together and they could kind of relax with their community and just hopefully be themselves and be comfortable,” Butler said.

Butler – who herself has worked as a paramedic and with EMS for decades – added that the focus on first responders makes sense for the church given the number of officers and other first responders in the congregation.

Organizers with Second Chance Ministries reached out to every church in Monroe County to help put the event together, with seven local churches pitching in with either monetary donations or volunteers for the picnic.

“We’re from different denominations, you know, but we all believe in Christ and showing his love to the people,” Butler said. “It’s so neat to see us come together as the body of Christ and just serve our community.”

Becky Harget, who pastors Second Chance Ministries with her husband Jim,  has also played a big role in putting the picnic together.

Harget spoke about the need for an event like this given the dangers and trauma first responders face regularly as well as a climate that has become increasingly hostile for many of them.

“Nobody has any respect for them anymore,” Harget said. “They have to put up walls. They see a lot and they go through a lot.”

Harget also spoke positively about Butler and the efforts she’d made both with this event and the parish support group Wallbreakers, which seeks to provide first responders with a safe space to discuss their concerns and personal experiences.

Wallbreakers, which has started meeting regularly at Second Chance Ministries the first Monday of each month, was started by Butler due to the high rate of suicide among first responders.

Butler explained that first responders are often afraid or unable to share their experiences and traumas, resorting to unhealthy coping mechanisms.

Having meetings which are exclusively organized and attended by first responders is meant to give attendees the chance to address those coping mechanisms and break down the walls that they’ve built.

“The coping mechanisms, they tend to harden them, and they build walls around their hearts,” Butler said. “We work together to turn down those walls that they’ve built by using those unhealthy coping mechanisms and replacing them with healthy habits and the love of Christ.”

Along with continuing Wallbreakers meetings, Butler and Harget hope to hold additional first responder picnics into the future to celebrate those heroes in the community, though future picnics will likely not be held precisely on 9/11.