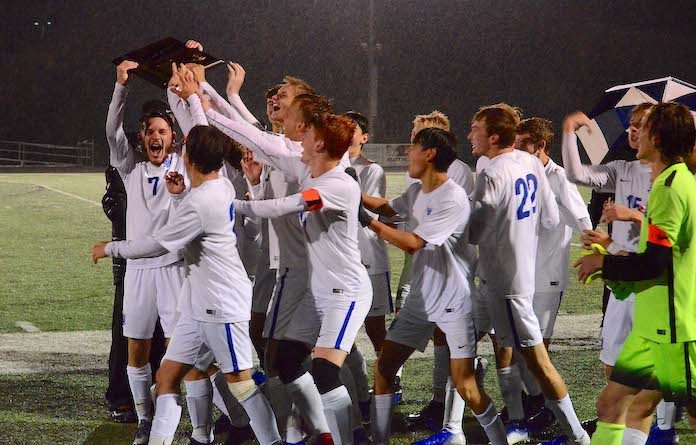 On a cold and rainy Saturday night, the Columbia High School soccer team defeated Mount Carmel, 2-0, at home to win the Class 1A Columbia Sectional championship.

The game was scoreless at halftime, as the Eagles were playing into the wind and the rain. Columbia had at least six corner kicks and multiple scoring opportunities – including an open goal that was missed from eight yards out – but just could not get on the board in the first half.

“Credit to their keeper. He stopped some good shots early,” Columbia head coach Jason Mathenia told the Republic-Times after the game. “We talked at halftime that we had to just keep going, keep battling and stay strong on defense.”

With just less that 20 minutes to play in regulation, Tate Schilling scored on a head ball off a corner kick from Aaron Rahn to put Columbia up 1-0. Schilling transferred to Columbia after playing with the Class 2A state fourth place Gibault Hawks last season.

“I just found a spot in the box and got a piece on it and it went in,” Schilling said after the game.”

Columbia goalkeeper Alec Venhaus made some solid saves to preserve the shutout, and leading scorer Jonah James notched his 29th goal of the season in the game’s final seconds.

Columbia (16-4-4) advances to the Mater Dei Supersectional, where it will face a familiar foe in Marquette. The teams battled to a 1-1 tie in Alton on Sept. 2 and Marquette won 3-2 on Sept. 30 in the CYC tournament.

“They’ve been battles back and forth for years,” Mathenia said. “I’m looking forward to this one.”

See more photos from the game by clicking here.