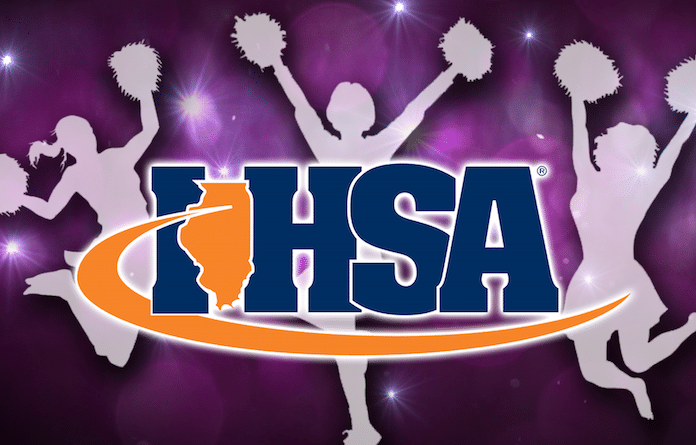 The high school competitive cheerleading coaches at Waterloo and Columbia reflected on their teams’ amazing seasons, which both resulted in top 10 IHSA state finishes.

Competing in the medium varsity division, Waterloo advanced out of the preliminary round of state competition for the first time en route to its 10th place showing.

“Our goal has always been to make the top 10 because we are up against teams that are double our size,” WHS cheerleading coach Brittany Imm said. “The medium division ranges from 625-1,501 (student enrollment), with our school size at 827. So, making the top 10 in the state is a huge accomplishment!”

Imm is the sister of Amber Cruser, who is credited for getting Waterloo started in competitive cheerleading.

“She has built a tremendous program here, with qualifying for IHSA state their first year competing in 2012-13,” Imm said. “However, we had never made the top 10. The emotion these athletes felt when they heard their name in the top 10 will forever be a favorite moment in my coaching career.”

Placing amongst the top teams in the state is not foreign to CHS cheerleading coach Robbie Walters. However, the coach said this season was unlike any other.

“In 15 years of coaching this season has been the most challenging, yet rewarding,” he said. “After taking a year off from competing in 2021, we suffered a significant setback halfway through this season. We had to regroup and re-teach our young team the skills necessary to compete, as well as how to perform as a Columbia cheerleader.”

Walters said that with a lot of hard work, determination, and “exceptional attitudes,” his group of five freshmen, three sophomores, two juniors, and just one senior transformed into a state-caliber team in the small division.

Only one of Columbia’s juniors, Evy Moore, had previously competed, Walters said.

“Throughout this season, we overcame one obstacle after another – even missing a few competitions due to illness,” Walters said. “But the girls’ perseverance remained strong, leading us to our 11 sectional championship and a top 10 finish at the IHSA State Finals. We learned so much about ourselves, pushing through the hard times, never giving up. The payoff has been watching this squad work together, with the odds seemingly stacked against them, and succeed. I am so very proud of these girls.”