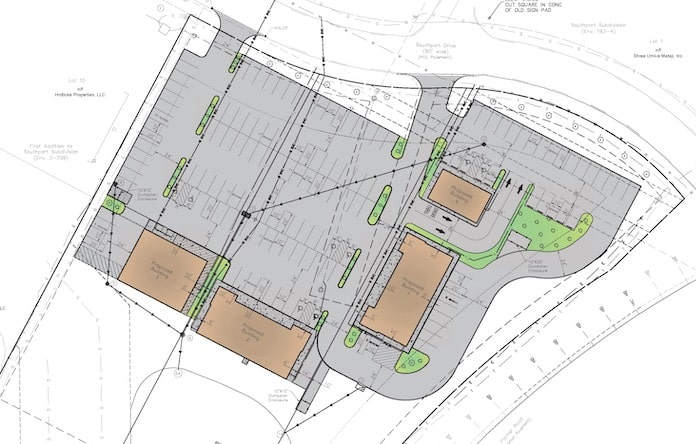 Land grading at the site was completed earlier this year.

There are four business spaces planned at that site, it was said Monday night, the cornerstone being an Enterprise Rent-A-Car location. Other possible businesses eyed include Starbucks Coffee, a gaming lounge and an accounting office.

The commission passed a motion to recommend approval to the Columbia City Council for a special use permit at that location.

Columbia Director of Community Development Scott Dunakey explained a special use permit is required to allow a car rental business in a commercial park district zone.

Dunakey added this area is already intended for “significant” retail development such as the one described during the meeting.

The four buildings include a 1,500 square foot future restaurant which Dunakey said was “intended to  be a Starbucks.”

Dunakey further explained two of the four buildings will be designed for multiple tenants. The Enterprise Rent-A-Car office would occupy one unit of a three-unit commercial building.

The site plan provides 150 parking spaces (including 10 ADA accessible spaces) to be shared by the development in accordance with city code,  and “should provide ample excess parking to accommodate the proposed rental car business,” a staff report read.

The report also addressed traffic concerns, stating “the subdivision was designed and constructed for significant retail development. The proposed rental car business should generate traffic volumes well within the capacity of the existing street system and is not expected to negatively impact roadway congestion or safety.”

The development is being proposed by Top Quality Holdings, represented by Chris Kalbfleisch.

He is known as the owner of Quality Collision of Columbia and Waterloo, which recently sold its auto body operations to Caliber Collision and changed the focus to mechanic and repair under the new name of Quality Auto Repair.

The Columbia City Council will vote on the special use permit request at a future meeting.

In late 2019, the City of Columbia passed an ordinance establishing cannabis dispensaries as a land use in a specific area of land near Southport Drive.

Stipulations requiring such businesses to be built in a commercial park district zone with proximity to an interstate highway and a buffer from school zones restricts a potential dispensary site at this proposed development, but one could be built just a little further west.

In other news, plans are already underway for another business venture in Columbia at the Main Street Abbey complex in the 300 block of South Main Street.

The site was once the home of Immaculate Conception Catholic Church and School.

Dunakey confirmed developers had submitted building permit applications several weeks ago in order to transform part of the old ICS school into a 32-room, hotel-type business.

The city has since approved the first phase of hotel renovations to the school building.

Development owner Gregg Crawford shared similar plans there in late 2019, although progress was delayed by the COVID-19 pandemic.